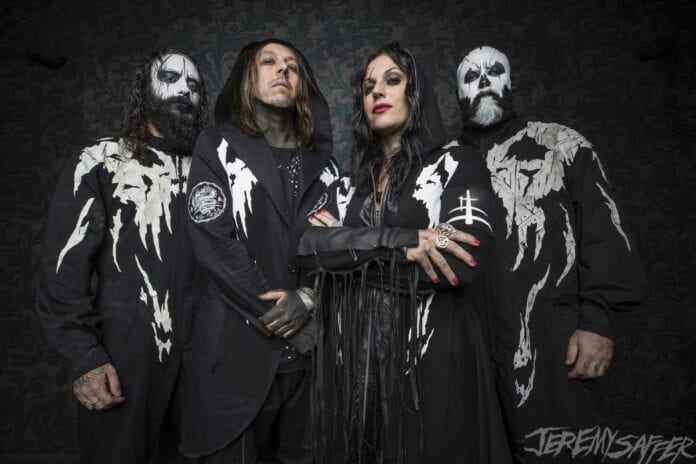 Outburn had the pleasure of speaking with Italian melodic rock star Cristina Scabbia of Lacuna Coil at the band’s Los Angeles show with All That Remains a few days before the release of the band’s new album, Black Anima. We dug deep into the inspiration behind Black Anima—Lacuna Coil’s ninth full-length studio album—and Cristina’s personal philosophy on the healing power of music.

Black Anima is about to be released. What’s going through your mind right now?
I’m feeling very excited and very impatient because, I mean, of course, we wrote the record and we heard it on the last day of recording, so we know exactly how it is and what it will sound like, but I can’t wait for our fans to have it in their hands and to enjoy it as a journey. I really want them to take one hour out of their day or days and listen to it from the beginning until the end.

Some bands have a recommendation on how they want fans to listen to an album. What is yours?
Well, I can tell them the way I like to enjoy music. I like a darker room with complete silence for the music you’re listening to, with your eyes closed. It’s the best, because unless you have something visual to go with it, you just have to enjoy what you’re hearing. This way you can hear not only the music but all of the layers in the songs and also the lyrics, and the lyrics on this record are really important as well. So, they should enjoy it like this.

Did you find writing Black Anima to be easier or more difficult than past albums?
It was difficult in the beginning because there was something that was missing from the inspiration, like we were kind of stuck and we didn’t know how to let this album start. We had so many things to say, but we couldn’t focus and find a way to convey all of the things that we had inside. So, all of a sudden, I remember that at a meeting, we put everything on the table and said, “Okay guys, I would love to talk about this. I would like to see this. I like this kind of imagery.” And we started to talk, and it’s almost like the album materialized itself there.

We came up with this idea of this book that keeps all of this secret stuff—all the stuff that you would never say because you want to keep it secret and were afraid of what people might think about you. We also saw it as a spiritual way to connect with the people that we love that are not here anymore, because some of us went through the loss of people in our lives. So, it was a lot of things squeezed in a record.

It’s really hard for me to explain how it happened because there are so many inputs to so many things. Just to talk about it in a couple of minutes probably sounds a little bit insane! But we knew where we were aiming for, and it all came together the way it was supposed to.

We were sure about the image because we definitely wanted this record to be heavier and darker, and we wanted to have a darker image to go with it. We like to add something visual on stage. I know some people ask me, “Why would you guys decide to go with face painting and stuff?” First of all, because we fucking can! There is a group of people who think that if you’re adding something visual to the show, you’re taking something away from the music, so they would love to see you up there with jeans and a t-shirt because that would mean that your music is more meaningful. And this is fucking bullshit, because they’re coming to see a show. They already know your music. They will enjoy you singing and playing, so they already have that. But if you can add something theatrical at a show, it’s much better.

Just try to think about going to see a theatrical opera and to see the lyrical singer in their jumper or in pajamas. It doesn’t make sense. To us, it’s really important to give something more to the show, so we decided to adopt this darker image. And, of course, we like the color black, that goes without saying! We imagined how we wanted to do our outfits, and we found the artist to draw the tarot cards that are in the special edition. We found the artist on Instagram. We found the photographer on Instagram as well. I contacted her and found out that she was a fan.

What is the concept of the album cover?
The album cover is an emblem on a red book, and that book is The Black Anima. The initial symbol was created by Marco [Coti Zelati], our bass player, getting inspired by the emblem of Milan, which is originally a snake with a kid in its mouth. So, he made a dragon with an angel in the mouth, and he surrounded the design with three snakes biting each other’s tail, which he thought about me and Andrea [Ferro, male vocals} and himself, because we’re the core of the band. From day one, we were in the band.

This record is, as I have said a few times in interviews, the realization that it is okay to go through darkness because eventually everything will be okay. Darkness is a part of life. There is no life without the darkest moments. It is simply unrealistic, especially nowadays the way everyone presents his or her life. On social media, everything needs to be perfect and polished and filtered, so everyone has expectations that are not real. And real life is something completely different. So, we just wanted to go back to reality and reassure whoever is freaking out because they feel they don’t belong because everyone else is too perfect and they are not. We just wanted to say, “Hey, we’re in the real world.”

“DARKNESS IS A PART OF LIFE. THERE IS NO LIFE WITHOUT THE DARKEST MOMENTS.”

You can use music as a healing process for that. It is even better when you can connect with other people when you’re getting messages telling you that, “You don’t know how much you helped me,” or, “I wanted to commit suicide and your music helped me through it and I decided to not to do it.” A lot of people going through very tough moments in life have been saved by music. So, I’m happy that we’ve been a part of the healing process. It is very rewarding. Even though we don’t do it on purpose, because again, we don’t write music with a recipe that we thought about before. We just literally sit down and see what comes to the table and what we feel we like. Marco comes with a musical idea. Then Andrea and I come on board with the vocal melody and lyrics, and then we listen to what we have to say. Marco takes our stuff and we record and he works on that and he give us back something different. It’s a back and forth process that goes on for a few months up until everyone is happy.

“WE ARE IN SOME WAY DIFFERENT PEOPLE THAN WE WERE AND WE WILL NEVER BE ABLE TO WRITE THE SAME RECORD THAT WE WROTE 20 YEARS AGO.”

How have you progressed and developed as a musician over the years?
I think that evolution is part of the evolution as people. We are heavily influenced by what’s around us. So, you leave and learn to listen to different music, you watch different movies, you read different books, and you grow as a person. So, all the experiences you have are incorporated in your music. And even though the core is still the same and because the songwriters are still the same, we are in some way different people than we were and we will never be able to write the same record that we wrote 20 years ago. Not because we change or that we don’t like it, but we like records to be the picture of the moment. We don’t want to write to please others just because we might sell some extra copies. We wrote for ourselves. We write for ourselves. It is the most honest way to do it, because if you like something, if you believe in something, it will be easier for whoever is out of the group to understand it.

So, each album is a snapshot in your own history?
Yes, it is. If Delirium, for example, was the moment of deep, deep, deep darkness, this is slowly getting out of it and we’re not alone.

Is there a particular song on Black Anima that is most sentimental to you?
I think all the songs have a special meaning for me. But I get more emotional when they are slower songs just because I really sit down and think about what I’m singing. It’s not about the energy. You think about the life aspect of some songs. I really sit down with songs. But I like all of them.

How did you pick out the songs that ended up being singles?
First of all, we hate the word “single.” But we knew that we had to release a song when presenting a new record. The record is so dynamic, and every song is so different from each other. It was really hard because we’re really undecided, and between two to three songs on the record, there are some songs that will take more time to be elaborated and digested.

THE HU: From Mongolia to the World… Who Are The Hu?