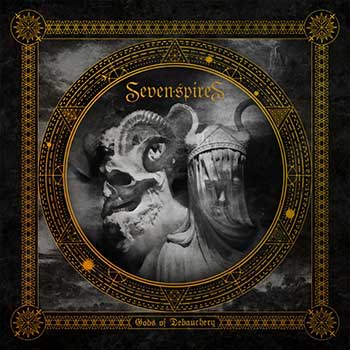 From the theatrical atmosphere of brief album opener “Wanderer’s Prayer” to the emotional closer “Fall With Me,” the listener will be enthralled from beginning to end. In between, the band displays its melodic death metal side by channeling the best parts of Children of Bodom on the title track and “The Cursed Muse,” while its more melancholic moments are displayed on “Ghost of Yesterday” and ballad “The Unforgotten Name.” Heavy, symphonic black metal elements are equally introduced on “Shadow on an Endless Sea,” “Dreamchaser,” and “Gods Amongst Men.” There are many moments throughout the album when Cowan sings as sweet as a minstrel, delivering her impressive multi-octave range with soaring harmonies, while the next moment she’s growling like an accomplished death metal vocalist with full-throttle ferocity. Special guest vocalists Qantice’s David Akesson, OK Goodnight’s Casey Lee Williams, Threads of Fate’s John Pyres (“The Unforgotten Name”) and Conception/ex-Kamelot singer Roy Khan (“This God Is Dead”), enhance the band’s compositions to new heights, especially with the duet of Cowan and Williams on “Lightbringer.”

With a total of 16 tracks at over 70 plus minutes, there’s a lot to digest in one sitting. However, Gods of Debauchery is a fantastic and wonderfully diverse album that’s both technical and challenging, yet engaging and accessible at the same time. The album’s great songwriting—complimented by melancholic, theatrical atmospheres, and dramatic orchestrations—gels extremely well with the creative moods, lyrical themes, and skillful musicianship. Gods of Debauchery has everything an adventurous and modern melodic/symphonic metal fan would love. ~ Kelley Simms