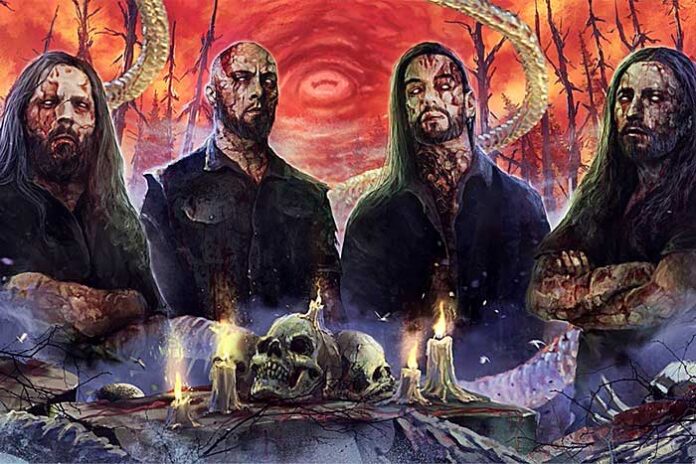 Aborted has been at it for an extremely long time and shows no signs of slowing down. Their gore infested sound mixed with blast beats will never get old, especially on the band’s new release, ManiaCult, which has all of the usual traits of an Aborted album—brutality, technicality, and absolute craziness. Even with some newfound diversity, such as vocalist Sven de Caluwe’s high-pitched vocals, Aborted is still a classic gore and guts band. Fans of Aborted’s older material will certainly love the grindy influences on ManiaCult and the band’s brutal soundtrack to classic 80s horror films. We spoke with Sven de Caluwe about writing and recording the album during the pandemic, the sound behind ManiaCult, and his best music business advice.

What was it like writing and recording ManiaCult with the band living in different countries and with closed borders?
It was nothing new. We have always had to deal with working remotely when it comes to writing. However, this time we had planned to actually have a period prior to recording to jam everything out and flesh it out in a live way, which turned out to be impossible. Recording remotely was a different case. We are used to locking ourselves up for a good month at the studio together to focus on that. This time around we all recorded in different locations, but thanks to an extensive preproduction period, it turned out to be easy and actually beneficial since we had much more time to get things done. Especially for the vocals, I had more time and less pressure than to have to knock it out in four or five days in a row.

Your vocal style is more diverse on this album compared to previous releases. What inspired you to take your vocals up a few notches?
Having more time to record definitely helped. These were things I already started doing on the previous releases but just less apparent. There were a bunch on the EP and Terrorvision, but they were buried in the mix or not as dominant as they are now. I worked on them more and also included a more old school sounding voice in there. A lot of times it’s just hearing new shit and wondering how that translates to what you are doing, because it’s never my goal to sound like someone else but to do my own thing with new ideas. I had a blast trying to come up with as much variations as possible and trying to keep the songs as interesting as possible.

“THE MAIN GOAL WAS TO WRITE THE MOST VARIED AND DYNAMIC RECORD WE COULD, AND IT TURNED OUT TO BE A RECORD THAT EMBODIES NEARLY ALL ERAS OF THE BAND”

ManiaCult has the technicality of newer material, but still has the feeling from your earlier albums, specifically Goremageddon and Archaic Abattoir. Do you agree?
I’ll agree with that, in the sense that there’s a lot of new but also a lot of “we haven’t done this in a long time” on this record, so it’s not weird you bring up those records. The main goal was to write the most varied and dynamic record we could, and it turned out to be a record that embodies nearly all eras of the band going from Engineering the Dead to Goremageddon/Archaic to the newer stuff. From grind vibes to grooves to those really oppressing dark atmospheres and tech parts.

Did you use any specific horror movies as inspiration for ManiaCult?
Not really, it’s just its own universe drawing from the general 80s/90s vibe. Though “Drag Me to Hell” is clearly about the movie (laughs), but that would be the only one. That era of horror is perfect for the band and embodies us as people as well as our music. It’s visceral, there are some wild ideas out there, and it can get campy and ridiculous, which pretty much sums up what this band is about (laughs).

“IT CAN GET CAMPY AND RIDICULOUS, WHICH PRETTY MUCH SUMS UP WHAT THIS BAND IS ABOUT”

Aborted releases a ton of music. How do you guys find the time to write and record so much?
We lock Ken [Bedene, drums] up when we are not on tour. We have this crazy ass dungeon somewhere in the eerie mountains of Chico, CA. It’s actually fully modeled after Castle Dracula for the ideal setting. Also, we don’t feed him. He just plays video games and writes death metal songs. Perhaps at odd times we let him out to play some shows. Honestly, we don’t just finish an album and then sit on our ass until it’s cramming time. We take a good six months or more off after a record from writing, and then first discuss where we think we should go with whatever comes next and then quietly and ever so gently get cracking on that behind the scenes and see how things go. Many songs get written and many of them don’t make the cut as well, since we are quite critical on what gets actually recorded.

Aborted is not only brutal but every album is consistently solid. How do you think of new ideas while maintaining your core sound?
We start writing new stuff, and we figure out what we have done until now and where we see it going to still be interesting. I know Ken also wants to outdo himself each release and make things more extreme and challenging, but that’s not the main aspect of things. Aborted is all about raw energy, especially live, so that’s something we want to capture. Sometimes having a good sense of variation and dynamics brings more brutality than straight out blasting 300 bpm for 40 minutes. The bottom line is we all know what this band is like and where we are coming from, and even though there is a sandbox to play in, we always push to make that box larger and include new ideas.

You released an Instagram filter of the new album recently. How did you think of that idea?
It’s something we’ve seen popping up here and there, and it was just perfect for our Wayland character. Brad [Zorgdrager] who has been helping us out on many things and is just a most excellent gentleman made it all happen. Brad has been kicking ass on many fronts helping us, and we couldn’t be happier as he has the same type of insane ideas as we have, so it’s a perfect match.

Why stick to a four member lineup?
It’s not a permanent thing, but when we parted ways with Mendel [bij de Leij, guitar], we wanted to make sure that whoever replaces him is the right person for the band. We haven’t found that person yet, and since the entire record and EP was written by just the four of us, it seemed to make the most sense to do it that way until we find the right person to fill that position. Manu from Benighted will be filling in on our upcoming European tour, and we will audition people eventually, it’s just not high on our priority list at this moment. There are a ton of sick players out there, but we have to find the right match personality-wise and also someone that can effectively contribute to the writing.

In the video for “Impetus Odi,” it’s you alone rather than with the full band. Was it weird filming the video by yourself?
Yeah! You can imagine why that was. Travel restrictions made it so I was the only one able to be at the shoot. Fortunately, the entire team was super professional and they did an incredible job doing all that work in just one day of shooting. It was impressive to see the amount of detail, vision, and execution G13 has and put in all their projects. Hopefully, we can do another video at some point with the whole band once the world stops being fucked up. Was it weird? Yes. Did it have to be done? Yes. You do it because you have to and we move on. I would have loved nothing more than the entire band to be part of it.

Bands that have toured with Aborted have said they learned a lot about the music industry and the management side from you. Do you have any business advice to give to other musicians and bands?
(laughs) That’s a cool compliment, so thank you whoever said that! My main advice is make sure the base is right, get the music part down right and then work on the rest. I see too many artists focusing on the business and image part, and when you don’t have a solid base to back that up, well, you know where that’s going. Be yourself and don’t forget to have fun, most of all. Because if you’re not having fun, there’s no reason to be doing this.