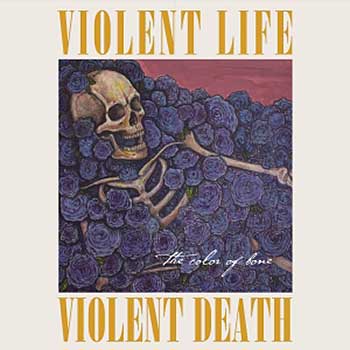 METALLIC HARDCORE FIRESTORM: A 747 filled with a bunch of 90s metalcore bands from Western NY leaves Buffalo-Niagara International Airport at 2PM travelling eastbound at 750 mph. At the same time, an airbus loaded down with some of the finest names in German thrash from the 80s leaves Berlin-Tegel Airport traveling westward at 823 mph. X is the location where they collide in mid-air, solve for x. Our less than stellar math skills might make it so that we have no idea where x is, but let it be known that wherever that smash-up derby in the clouds occurs is where this demonic bunch hails from. Theoretically, of course.

All the information we’ve been able to track down about this incendiary quintet claims they formed four years ago and hail from Charlotte, NC. And a spin of The Color of Bone, their latest and fourth EP, is what fostered the belief around Outburn’s Canadian bureau that Violent Life Violent Death could have actually been the emergent result of the aforementioned sketchy math problem. Either that, or they collectively own the complete discographies of Snapcase, Another Victim, Earth Crisis, Path of Resistance, Kreator, Sodom, and Destruction and have no quarrel with any of them being on the gramophone and nabbing bits of influence from all and sundry at any point in time. I mean, people will believe anything. Prime example: look at the utter nonsense that a certain orange piece of shit living in the White House has spewed daily for the past 1400+ days that idiots everywhere buy into without a second thought.

Violent Life Violent Death’s approach to metallic hardcore is vicious and fierce with all the subtlety of a lunatic loudly spouting off his/her paranoia in the town square. A massive guitar sound precipitates a song/riff writing methodology in which a slamming, thick low-end is punctuated by peals of upper register dissonance, slashing like a coked up sword swallower with everything driven forward by stick work that punishes at all tempos and the stacked rasp of vocalist Scott Cowan’s throat shredding. And when he unleashes the “I wish you were dead” refrain during “Dead With Me,” well, let’s just say that the individual in his crosshairs might want to go into hiding promto, or Cowan had better have a good alibi for the inevitable night in question.

Overall, what’s being done here isn’t a completely novel take on an established art form. The Color of Bone has definitely been done in many forms and fashions over the years, but it’s this band’s scathing ire and deadly execution that gives a leg up in separating them from the saturated pack. ~ Kevin Stewart-Panko