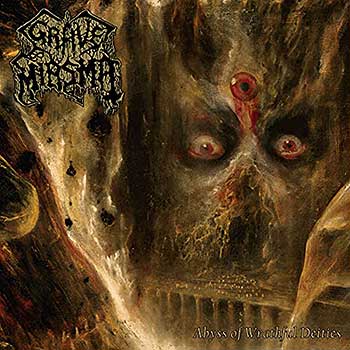 METAL OF DEATH: The band, who first entered the scene under the comparatively silly moniker of Goat Molestör, got a lot of people talking with their initial batch of split releases, but their profile grew even more once Grave Miasma delivered a debut full-length in 2013.

This was a band taking those much-heralded influences of Celtic Frost and Morbid Angel, but driving them home with angular and original arrangements torn from the playbook of fellow UK death metallers Akercocke. And sure, Odori Sepulcrorum was a killer opening salvo, but this sophomore effort ups the ante considerably with a heaping dose of confidence in its songwriting.

Abyss of Wrathful Deities has that occult “metal of death” vibe in spades, the sort of true till death feeling you get from listening to a band like Mexico’s The Chasm. There’s a legitimacy to how Grave Miasma picks and chooses the chords on a song like “Under the Megalith,” creating this Lovecraftian mood that captures the imagination almost immediately. Then the riffing kicks in, and it’s a headbanging good time that feels simultaneously classic and fresh. This is intensity, but it’s also cerebral and measured with how it lays out punishing power and palpable atmosphere.

“Erudite Decomposition” is another song where this is exemplified perfectly, making it difficult to believe that Grave Miasma can grow this much only after a couple of albums. It’s tough to say exactly why this album rules so much without delving into endless hyperbole, but in this case the hype is very real. The metal audience today seems to crave this type of authenticity—a nod to how extreme metal made us feel in the pre-internet age, a time when bands could still capture this mysterious aura.

Grave Miasma also brings along the musical chops to back up any misconception about style over substance. Abyss of Wrathful Deities isn’t only one of the year’s most exciting death metal albums, it’s a startlingly good reminder about why we love this stuff in the first place. ~ George Pacheco

WORLD WAR IX: Phoning It In