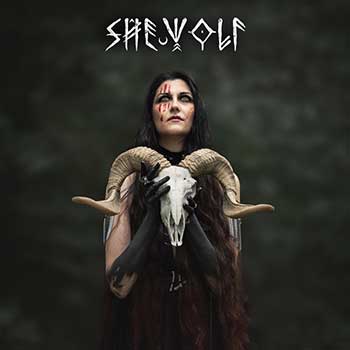 FOLK METAL POWER ROCK: If you want to add something a little bit different to your collection, meet Shewolf. With operatic, high-pitched vocals and warbles courtesy of fantastic singer Angel Wolf-Black, it could be described as folk metal power rock, or something along those lines. Opening up with a jaunty folk melody that makes you want to break out into a jig, “The One You Feed” is certainly not what you might expect. At times it’s more classic rock than metal, busting out soaring guitar solos and dramatic power chords that throwback to the 80s. It also has a flute. Once you get over the initial surprise and settle into the sound, which mostly runs the same throughout, it’s quite enjoyable and catchy.

With titles such as “Welcome to the Pack,” “Lone Wolf,” and “Moonbound,” it’s clear there’s a werewolf theme going on here. Lyrically, there’s some obvious rhyme schemes (“welcome to the pack, we’ll always have your back”), and the chorus and structure of “Lone Wolf” definitely sounds like another song written years before that was, but because of this, it’s accessible and weirdly infectious, the familiarity breeding a more instant connection.

Power ballad “Home” nicely breaks things up a bit. Then the pace picks up again with “Moonbound,” throwing in dramatic symphonic elements and fast snare rhythms that drive the track forwards. The album dips somewhere in the middle, with the tracks feeling very similar, not to mention the repeated lyrical topics. It’s cool to see the band going all in on this, though, with the other members only known by mysterious names related to the world they have created—The Hunter (guitar), The Predator (bass), and The Alpha (drums).

“Nothing Is Forever” is another slow one, but it’s where the record begins to get interesting again. Swapping out guitars in favor of piano makes it stand out, and the stripped back nature of the track allows Angel’s vocals to come to the fore. It’s one of her most haunting and impactful performances on the record. Ending on an instrumental and orchestral version of “Lone Wolf,” this type of music probably isn’t for everyone, but the album has many interesting standout moments that make Shewolf worth a go, especially if you’re into werewolf mythology. It’s also pretty solid for a debut. ~ Becton Simpson