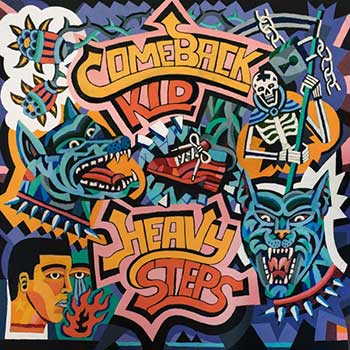 FEEL-GOOD HARDCORE: Comeback Kid returns to its roots on the band’s seventh full-length Heavy Steps, once again recording alongside producer John Paul Peters [Propaghandi, Cancer Bats] who put together the band’s debut Turn It Around (2003). Coming full circle, the Canadian hardcore outfit romps through 2022 with Heavy Steps, the perfect title for an album that is heavy musically by a band that doesn’t care how much noise they make metaphorically. Titular lead single “Heavy Steps” is a statement on “tearing through life,” according to vocalist Andrew Neufeld, and the same could be said of the album in general. It’s bold, loud, and tears through your speakers. Coming in at 33 minutes, it gets in hard and gets out fast, not leaving much breathing room in between big chorus opener “Heavy Steps” and finale “Menacing Weight,” a powerful, uplifting anthem of defiance.

The album also represents bass player Chase Brennemen’s first recorded output for the band. He joined in 2018, which was too late to take part in 2017’s Outsider, their last full-length, which fans have been eagerly awaiting a follow-up to. With things like worldwide pandemics undoubtedly slowing things down, that follow-up is finally here and it was worth the wait. Although they’ve been going since 2000, Comeback Kid is still one of the biggest names in modern hardcore today, and this album is a reminder why.

Melodic and heavy in equal measure, it’s littered with sing-along moments and hook lines that get stuck in your head (“No Easy Way Out,” “Face the Fire”). “Crossed” has a guest appearance from Gojira’s Joe Duplantier. One of the heavier, more downbeat style tracks on the record with a bunch of breaks and dirty, mean sounding guitars, it breaks up the melodic moments neatly with an offering of raucous energy before the more anthemic and uplifting “Everything Relates.” “Everything relates to everything,” screams Neufeld on the hook, an emboldening statement of unity.

The latter half of the record is just as strong, with pit stomper “Shadow of Doubt” and expertly crafted melodic “Standstill” a force to be reckoned with. “In Between” has some huge moments, building up a massive wall of sound only for it to come crashing down again in the breaks while vocals tightly hold everything together—Neufeld’s delivery both reassuring and devastating.

As the infectious album clatters to its chaotic climax, the overarching feeling is that of celebration and triumph, throwing a middle finger up at adversity, the hardships of life, and to keep on pushing through. While it doesn’t break any new boundaries or push the genre into unchartered territory, it’s half an hour of feel-good hardcore, and that’s exactly what the world needs right now. ~ Becton Simpson