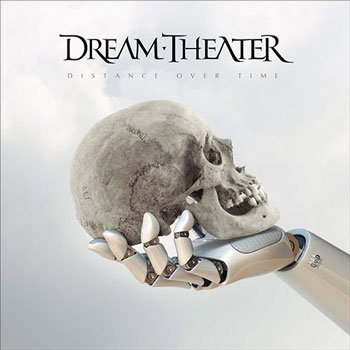 PROG METAL: There’s nobody better at being Dream Theater than Dream Theater. From the punny titles to the dazzling musicianship to the overblown production, they’re consistent and always distinct despite numerous imitators. Sometimes they’re a little too good at being Dream Theater, though. To wit: their 2016 album The Astonishing, a 130 minute sci-fi concept album. A very Dream Theater move, no doubt, but while it contained plenty of musicianship, it almost entirely lacked decent songs. Distance Over Time, the follow-up, is (comparatively) concise at just under an hour, and it almost seems like a mea culpa for The Astonishing’s astonishing bloat. The band’s decision to record in the same room helped make the songs tighter—a third of them clock in at around four minutes, none go over 10. It works, giving the prog fans the expected showboating and metal fans hooks that they can remember. All the hallmarks we’ve come to expect from the prog metal progenitors are here. “Paralyzed” sounds the most like it could’ve been on Images and Words (but with more crunch), “Fall Into Light” has some sweet 70s pomp action going, and “At Wit’s End” shoots off the flashiest fireworks. While some of the songs blur together in a spray of notes, this is a return to form that shows how well the band can Dream Theater. ~ Jeff Treppel