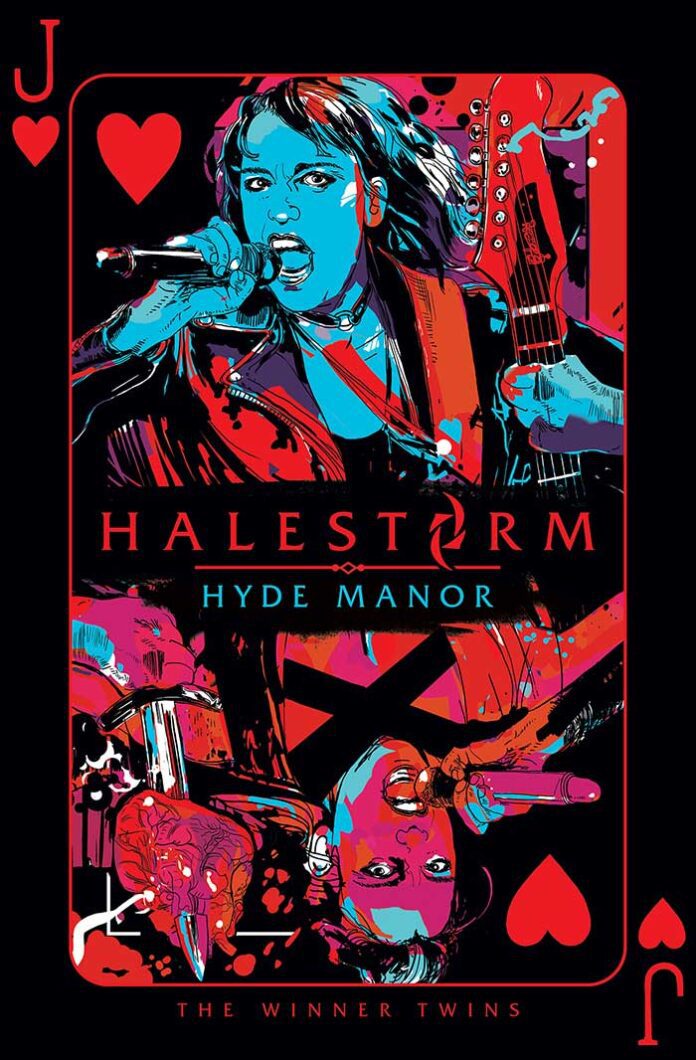 This Halloween, Z2 Comics and Grammy-winning rock band Halestorm will transform the group’s barbed riffs and evocative narratives into sequential art for Hyde Manor, a harrowing descent into one woman’s fight with the darkest parts of herself. Twins Brittany and Brianna Winner (the Twin Soul series), artist Sara Scalia, and colorist DJ Alonso weave a tale of the celebrated group as they seek refuge in the titular Hyde Manor—a sprawling gothic estate perched on the remote end of the Oregon Coast.

Celebrating the 10th anniversary of the 2012 EP Hello, It’s Mz Hyde and its ensuing LP, The Strange Case Of…, the Hyde Manor graphic novel depicts the members of Halestorm encountering sinister doppelgangers of themselves. Within the decrepit halls of Hyde Manor, mirror reflections independently talk back and photographs transform to reveal sordid prophecies, leading the band to slowly succumb to madness while recording a new album. The tale creaks and twists with doom-filled revelations, perfectly tied to Halestorm’s scorching discography.

“I’m so incredibly excited that this is finally happening,” says Halestorm frontwoman Lzzy Hale. “We are releasing a graphic novel! Penned by our beautiful badass friends the Winner Twins and featuring a few of our favorite artists, the story takes you down a rabbit hole of good and evil. An epic battle of Darkness vs Light. Is it truth? Is it fantasy? You decide!”

“We’ve enjoyed Halestorm’s music for many years; being entrusted to co-create a world and story based on their work is truly an honor,” co-writer Brianna Winner continues. “We wanted to create a story that reflects not only their music, but also their individual personalities.”

“The graphic novel will be a dark, paranormal mystery starring the band members as the main characters,” co-writer Brittany Winner elaborates. “The journey that unfolds will mirror their individual artistic journeys, so each of their personalities will really be able to shine.”