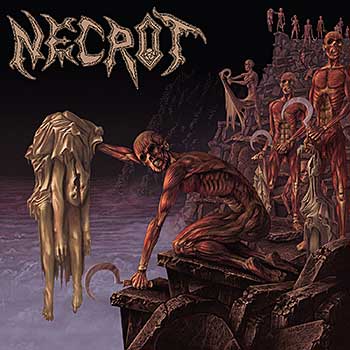 Although Necrot may not bring anything new to the table within the genre, they create some of the most addicting riffs, reminiscent of pioneers of the genre such as Bolt Thrower, Jungle Rot, and Dying Fetus. The hellish trio, featuring drummer Chad Gailey, vocalist/bassist Luca Indrio, and guitarist Sonny Reinhardt, is a force to be reckoned with.

Album opener “Your Hell” has a classic Necrot tone and vibe—slow burning and menacing, decorated with mesmerizing melodic chugging riffs and a mid-paced rhythmic thrust. It ebbs and flows immensely well and proves to be a good start to the record, while follow-up track “Dying Life” is a splendidly relentless chugger with a hard driving, mid-paced battering rhythm pattern. However, throughout the entire 39 minute album, there aren’t too many structured choruses to latch onto (although “Stench of Decay” and “Sinister Will” come close), relying mostly on the vocal patterns and typical death metal mid-paced rhythms to drive the songs along. The D-beat punk rock flavor of “Sinister Will” creates a great flow from one section to the next and keeps the listener consistently engaged, while “Malevolent Intention” (the shortest track on the record at 4:37) also contains a hardcore punk attitude with killer, head banging riffs that tread into Bolt Thrower and Jungle Rot territory.

Throughout the seven tracks, the band executes seamless transitions, consistent rhythmic flow and buzz saw guitar tones, while Luca Indrio’s horrid, raspy bellows fit well with the riffs and song structures. However, the vocals are a little indecipherable and too low in the mix, while relying on the wall of sound of the guitars to take center stage. Thankfully, there’s always at least one memorable riff or hooky passage on each track that makes your ears prick up in death metal delight (see “Asleep Forever,” “Malevolent Intention,” and “Sinister Will” for further proof).