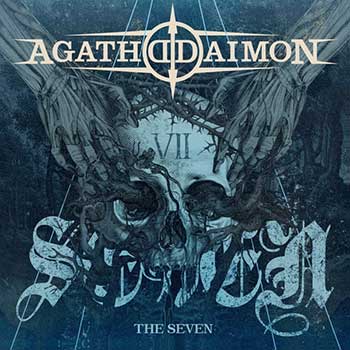 SYMPHONIC BLACK METAL: The Seven is the appropriately titled seventh studio album from German five piece Agathodaimon. It’s the band’s first release since last studio album In Darkness (2013) and their subsequent hiatus the year later. They returned in 2020 with practically a brand new lineup—only guitarist Sathonys and lead vocalist Ashtrael staying on.

The prospect of new music from the group is sure to get long-term fans of the band salivating, although they may be in for a surprise given the branch out into different styles and sounds of metal. They say variety is the spice of life and that’s certainly the case with The Seven. While tracks such as opener “La Haine” and “Ain’t Death Grand” contain some of the more traditionalist elements of black metal, there’s also plenty of different blends and experimentation.

There’s a few repeated choruses on the record that are almost sing-along worthy, and the clean vocals courtesy of guitarist Sathonys provide an exciting contrast to Ashtrael’s guttural growls and screams on tracks such as “Ghosts of Greed”—a dirty bluesy kind of number with a twist. “Estrangemen” features virtually no unclean vocals and feels more like a classic rock soaring power ballad at times. To call this simply black metal would be inaccurate. It’s all very gothic and quite bombastic, with the likes of “Wolf Within” being more traditional metal—gut-wrenching, dramatic melodies and overblown lead guitar licks.

The symphonic elements can be heard on “Mother of All Gods,” an atmospheric ear pleaser featuring a guest appearance from Vlad Dracul, the band’s previous singer and former keyboard player. It’s nice to know they’re all still on good terms, and although it appears Agathodaimon has re-examined its sound and approach to black metal during the hiatus, which might throw some of their older listeners a curveball, this album still goes hard.

If you are a fan of metal in general, there’s a little something for everyone, but if you’re expecting your metal to be of the purest black variety then you might not enjoy every single track. Ending on the dramatic dark opus “The Divine,” the record doesn’t overstay its welcome and is still relatively short by metal standards at 49 minutes. For old fans, it’s a chance to approach the group afresh and for those who haven’t heard of them before, The Seven provides a fantastic introduction. ~ Becton Simpson

IN COLD BLOOD: Legion of Angels