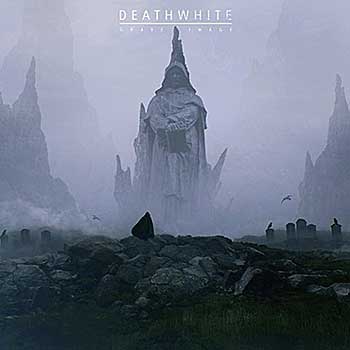 DEATH DOOM DARK METAL: The worlds of melodic death, gothic doom, and dark metal converge on Grave Image, the sophomore release from the anonymous robed metal collective known as Deathwhite. Building upon their 2018 debut For a Black Tomorrow, ethereal chants give way to bombastic and stomping riffs on the opening “Funeral Ground,” a true funeral march awash in dark melody and soaring harmonies. Expect much of the same over the course of the next hour or so, as Grave Image delivers serious Katatonia and Type O Negative vibes throughout the album’s 10 extensive tracks.

“In Eclipse” continues this trend with haunting whispers and moody riffs, effectively creating a bleak yet evocative soundscape devoid of all hope. “Further from Salvation” quickens the pace with urgent riffs and ominous bars like, “I found peace / Then it became my grave / Its wealth made me poor / My name now vanquished / In decay.” Beefy guitars and strapping percussion bleed into album highlight “Among Us,” which sounds as close to a traditional single as anything on Grave Image. “Words of Dead Men” continues a strong run during the middle stages of the album with gloomy guitar work and emotional vocals, “No Horizon” combines beautiful gothic melodies with chugging, dynamic riffs and chunky double bass, making for one of the album’s strongest moments, and closer “Return to Silence” delivers one of Grave Image’s most memorable hooks as Deathwhite sings, “Return to silence / Return to dust / Return to stillness / Return to us,” which pretty well encapsulates the record as a whole.

Grave Image isn’t without its detractions. There are points during the album that tend to waver off course somewhat, with one song bleeding into another at times. It is a truly exhaustive listen. While it would have been good to have at least a modicum of sonic variety, we’re not really sure it would have worked to be honest. For what it is, Grave Image is a great record. ~ Brian Campbell