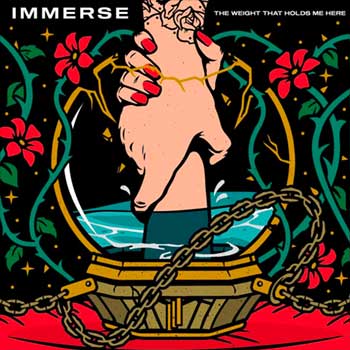 IMMERSE
The Weight That Holds Me Here

MELODIC HARDCORE: Submerge yourself in the second full-length from UK based melodic hardcore outfit Immerse. Amassing a cool half a million in single plays on Spotify and over a million streams of their debut album Suffer, the Bristol based quartet is making a name for itself on the competitive post-hardcore scene of the UK. Having toured with Holding Absence, Blood Youth, and Heart of a Coward, Immerse is an exciting up-and-coming name to watch out for, and the band’s second offering is a step in the right direction.

Produced and engineered by their own guitarist and songwriter Tim Brown, the band’s second album is slightly darker in theme than their debut. Blending different sounds, styles, and genres over the course of an 11 track punch to the face, The Weight That Holds Me Here is an exploration of angst and human emotion as they discuss some tricky topics. “Withyou” is a song vocalist Archie Hatfield wrote about his family when they were going through tough times together. It’s a sentiment that feels even more pertinent in today’s dark times when we need our family more than ever. The track provides the first move away from the classic hardcore sound of the two opening songs. Positioned third on the album, “Withyou” has a delicate and heartfelt verse then breaks out into a heavier chorus while still staying within the realms of a hardcore power ballad.

With tight, punchy riffs and gritty guitar breaks, there’s plenty of impactful songs that get in and out fast, leaving the listener breathless and wanting more, and plenty to satisfy any fan of the melodic hardcore genre. However, the band shows its experimental side on “Mon Seul” and “More,” the former a penultimate eerie instrumental and the latter a mostly instrumental with delicately sung vocals towards the end. There’s also a pop punk influence here and there, most obviously on “Southbound.” It’s these moments that showcase the variety of styles Immerse is able to bring to its own unique take on the genre.

A band finding its feet and establishing its style and sound, Immerse still has a way to go to establish themselves, but putting out a solid album like The Weight That Holds Me Here is a sure way to go towards that goal. Unafraid to push boundaries and make listeners uncomfortable, the topics of loss and depression rear their ugly heads lyrically while still offering listeners an optimistic and hopeful outlook for the future. On the powerful “Paralyse,” Hatfield sings, “I’m terrified of the night, living in fear of my own subconscious, nowhere left to hide, I’m head deep in a nightmare,” yet the album ends on a positive note with the stirring “Here’s Hoping.” Mixing big melodic echo drenched choruses and emotive guitar buildups with the punch of hardcore, it’s a powerful and uplifting finish to an impressive sophomore record. ~ Becton Simpson