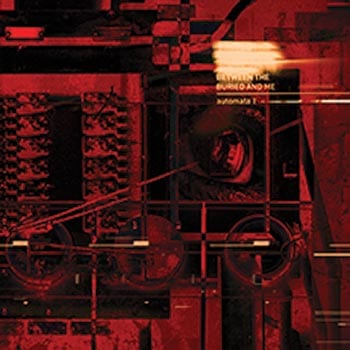 BETWEEN THE BURIED AND ME
Automata

PROGRESSIVE METAL: Fans have become so accustomed to Between the Buried and Me outdoing itself with every release, that it takes something like Automata—a two part album, similar to the Parallax series—to surprise them. Comparing this collection to competitors still proves that this band is light years ahead in construction and execution, and yet, Automata feels a bit safe for them. That being said somewhat reluctantly, Between the Buried and Me is massively impressive and masterfully skillful in its art, and this album feels almost like a bridge between Alaska (2005) and Colors (2007), about the time the band was expanding its sound into more experimental sectors. As such, there aren’t as many colorful moments, though “Yellow Eyes” features some tapping, electro sections with croaking vocals, and “Glide” plays with a Nightmare Before Christmas-like structure, before exploding wonderfully into “Voice of Trespass,” leaving Automata a simpler release for Between the Buried and Me. Such a minor complaint and observation aside, this is an album that is adroit and majestic, dipped in acute finesse and care. As one has come to expect from Between the Buried and Me, both parts of Automata deliver compelling thrills that command other musicians to take notice. ~ Nathaniel Lay