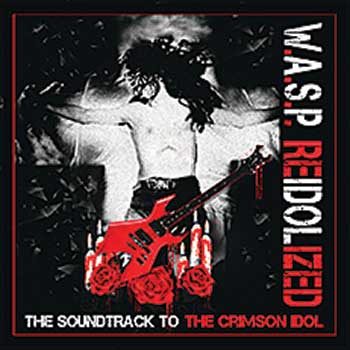 W.A.S.P.
Re-Idolized (The Soundtrack to The Crimson Idol)

EPIC CONCEPT, EXCELLENT EXECUTION: Blackie Lawless and W.A.S.P. are undeniable pioneers when it comes to the world of sleazy ‘n’ shocking Los Angeles metal, but in 1992, the band released one epic length album, The Crimson Idol. The album was very much a semi-autobiographical look at the psyche of Lawless via the fictional Jonathan Aaron Steele, a troubled and abused young man who winds up achieving fame and fortune and self-destruction in the world of music. The album itself served as a creative high point for W.A.S.P., which had steadily been increasing its musical chops throughout the 80s, and The Crimson Idol showcased Lawless at a songwriting peak that was reflected within the album’s immensely strong songs. Fast-forward 25 years later, and the album is seeing a deluxe reissue from Napalm Records, including 50 minutes of footage shot in 1992 for a short film. It’s great to see this material so many years later, as there is an earnestness to the direction and performances that fit in just fine alongside the album’s focused storytelling. Sure, some may see this seriousness as pretention, while others may write it off as yet another example of 80s metal excess, but for this writer’s money, The Crimson Idol is worth its weight in gold. ~ George Pacheco