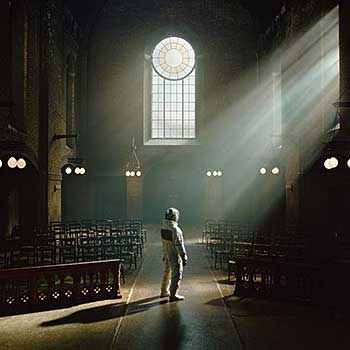 ARCHITECTS
For Those That Wish To Exist

MAINSTREAM METALCORE: On For Those That Wish To Exist, UK metalcore veterans Architects shift course, dialing up the synths and melodic vocals that had been relegated to being textural elements on their previous effort Holy Hell. What results is an album that will likely divide their fan base as much as it sees Architects gain mainstream appeal on a level that they’ve yet to see in their career.

The singles the band has put out thus far, including heavier smash hit “Animals” and more melodious tracks “Meteor,” “Black Lungs,” and “Dead Butterflies,” are a good metric for the album itself. Is there some heaviness? Sure. Are there chunky guitar riffs that make you want to stomp around the room? Absolutely. But on the whole, the band seems to have embraced a sort of electro rock style that feels inspired by Linkin Park, chock-full of stacked vocal melodies and soaring orchestral and synthesizer elements.

Tracks like “An Ordinary Extinction,” “Little Wonders,” “Libertine,” and the aforementioned singles are all infectiously catchy and at times, near anthemic songs that showcase frontman Sam Carter’s high vocal range and scream-singing style over his well established screaming abilities. Granted, this isn’t completely unprecedented for them or other bands of their vintage in the metalcore genre. Look no further than Architects’ shift away from scream heavy tracks back on 2012’s The Here and Now. What’s more, bands like Parkway Drive and Bring Me The Horizon have made this same move towards more broad appealing, arena and radio ready music, albeit much more gradually.

All this being said, if you’re looking for the mosh pit ready tracks, Architects has several solid offerings on here. “Discourse Is Dead,” for instance, is a scathing rebuke of the current state of affairs in society that will make you want to two-step your way around your living room. Meanwhile “Goliath,” featuring Simon Neil of Biffy Clyro, and “Impermanence,” which features Parkway Drive frontman Winston McCall, are an absolute head banging thrill ride. Were COVID-19 not still decimating the music industry, Architects should be headlining every major rock festival this summer on the back of this record. For Those Who Wish To Exist will almost certainly catapult them into new listening spaces, but for those willing to come along for the ride, there is plenty to offer on the louder, more metal end of the spectrum. Taken out of the context of their past albums and on its own merits, this is a solid effort that sees the band growing and taking things in a new direction. ~ Nathan Katsiaficas