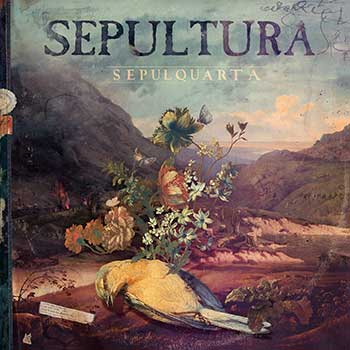 When a band reimagines or reboots its songs from its back catalog, the purpose is to add some new dynamics and make each track more unique. And for the most part, the tracks achieve a unique characteristic that wasn’t in the original without destroying the essence of what it initially achieved. Opening with one of the band’s most popular early era tracks, “Territory” from 1993’s Chaos A.D., the band performs pretty close to the original with a solid bass sound from Ellefson on his custom five-string Jackson bass guitar. Obviously, some tracks work better than others. For instance, “Inner Self,” featuring Sacred Reich’s Phil Rind, is nothing spectacular, and by these standards, is surprisingly rather static. But standout tracks such as “Mask,” featuring the effervescent Devin Townsend is absolutely stellar, as is the triple Brazilian female vocal assault of “Hatred Aside,” featuring Crypta’s Fernanda Lira, Hatefulmurder’s Angélica Burns, and Torture Squad’s Mayara Puertas, while “Slave New World” from Chaos A.D., featuring Trivium’s Matthew K. Heafy, offers an added menacing intensity. “Fear, Pain, Chaos, Suffering” from the Quadra album, featuring fellow Brazilian Emmily Barreto of Far From Alaska, is an amazing track. The vocal tandem of Derrick and Emmily sounds haunting and works well together, especially on the song’s climax.

Sepultura is a thrash metal entity that has survived for 37 years. However, If you’re still one of the band’s so-called fans who are screaming about how it isn’t Sepultura without Max Cavalera, you’re missing out. The band has been putting out some of its best material in the past few years, and these new versions of some of their older (and recent) tracks hold up rather well. ~ Kelley Simms