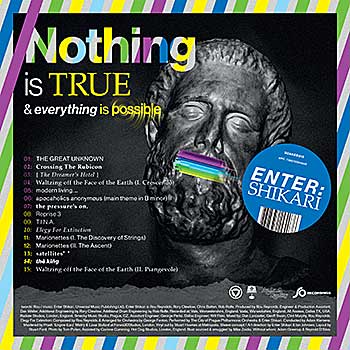 ENTER SHIKARI
Nothing Is True & Everything Is Possible

UNCANNY AND INSTINCTUAL SHAPESHIFTING: Enter Shikari has this innate ability to morph effortlessly from heavy, Warped Tour-esque giants—manipulating and manhandling the more electronic and robotic aspects of the genre—to a band that could open for U2 across the world. It’s an uncanny and instinctual shapeshifting, one that no one else today can claim. Six records deep and Nothing Is True & Everything Is Possible marks yet another distinct change in direction. While no strangers to controversial topics—political and otherwise—Enter Shikari breaks new ground on Nothing Is True & Everything Is Possible. Opener, “The Great Unknown,” sets the table for the rest of the record, with a call for help acting as a signpost for where Nothing Is True & Everything Is Possible is about to take the listener. The record as a whole feels like a dangerous journey through dark woods. “Crossing the Rubicon” harkens back to the urgency of A Flash Flood of Colour,while “{The Dreamer’s Hotel}” reminds longtime fans that Enter Shikari can write a catchy hit with their eyes closed.

The meat of Nothing Is True & Everything Is Possible drops its weight in tracks like “the pressure’s on.,” where Rou Reynolds channels Bono, a surprising treat leaving the listener pondering the future of a potential mainstream stint for the band. There really is something for everyone on their sixth release. “Waltzing Off the Face of the Earth (I. Crescendo)” is a trip to the circus before the instrumental “Elegy for Extinction” provides a breather, feeling like a walk through Downtown Disney. “Marionettes (I. The Discovery of Strings)” swings the listener back around to Enter Shikari’s more electronic, dance vibe fare before “satellites**” again ratchets up the catchiness with lyrics that reflect the band’s consistent obsession with space imagery. It’s a radio hit, bouncy and upbeat, something Enter Shikari seems to pull out of their back pocket to give a brief reprieve from the heavier subject matter they tackle throughout.

The record ends with two bangs, “the king,” which brings back Reynold’s rapid vocals and aggressive calls to action. Finally, “Waltzing off the Face of the Earth (II. Piangevole”) concludes the epic aria that is Nothing Is True & Everything Is Possible, a soaring, beautiful closing piece that feels as if the five piece is coaxing the listener to calm down, breathe, and finally rest. Just like the album’s title, Enter Shikari once again destroys any molds set forth by their peers. There are no rules for Enter Shikari, and that’s why they are making some of the best and most underrated music today. ~ Jameson Ketchum