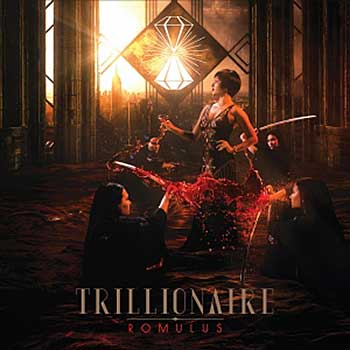 MODERN ROCK ROCKS WITH MODERNITY: The list of contributors involved in the debut from this US collective include some familiar names. On engineering duties is Mikey Allred (Inter Arma, Barishi); Matt Bayles (Mastodon, ISIS, NIN) mixed and Ed Brooks (Pearl Jam, Minus the Bear) mastered the album; and former ex-Neurosis multimedia-ist Josh Graham, who has since worked on projects for Soundgarden, Madonna, and Jay-Z, handled the cover art and visuals. That says nothing about who’s actually in the band. Members include ex and current folks from Inter Arma, Revocation, KEN Mode, Tombs, and A Fucking Elephant. Joining Phil DuBois, Andrew LaCour, and Greg Meisenberg are bassist Matt St. Gelais, guitarists Drew Storks and Kevin Savage, and vocalist Renee Fontaine. These last few names may be unfamiliar outside the graphic design, art, and photography world, but throw everyone together and their various experiences, influences, and backgrounds gel to create an unholy holy racket. Fontaine is the unheralded gem as he summons and weaves Mike Patton, Mark Osegueda, early Layne Staley, Corey Taylor’s non-Slipknot ululations, Greg Puciato’s non-screaming, and the guy from Dream Theater with a baritone-light timbre that straddles alt metal and the sort of angst-y spittle flecked vocal finger pointing that the frontmen in Three Days Grace, Bush, Shinedown, and Seether think they sound like.

The above paragraph outlines the amount of talent that has gone into Romulus. The music of Romulus itself often demonstrates what happens when you have too many cooks working in a kitchen the size of my kitchen. At its heart, Trillionaire posits muscular alt rock reminiscent of Failure, Hopesfall, Open Hand, Hum, and latter day Faith No More. Swirling guitars play into labyrinthine and layered single note pattern riffs as the rhythm section pulsates with a necessary steadfast air, attempting to keep the riffs and melodies from veering too far out into space. Most of the solidity in this record’s best songs come from Fontaine’s ability to slither his vocal chords through a myriad of suspended chord lurching and wiry string skipping doused in chorus and reverb to lock down a phrasing direction. This is the expensive way of saying that he’s mostly responsible for providing listeners something memorable to hang their hats on in light of riffs that sometimes veer into territorial outposts.

Lead-off track “The Golden Goat” demonstrates this unnerving tendency as the chorus’ chord progression leans in with purpose, power, and fist-pumping familiarity, while the verses seem more like connective tissue noodling. “Yes, Mistress” and “Temple of Mercy” suffer the same ailment with some sections not having enough bite as others throw down with a Pacific Northwest assertiveness and the most anthemic bits emerge, riding on Fontaine’s delivery. On the other hand, “Dead By 25” is like a Dillinger Escape Plan single crashing a party held by Faith No More’s King For a Day… album—exceptionally catchy from start-to-finish with the vocal strata and dueling guitars all zeroing in on the singular purpose of a solid dynamic tune. Same holds true in “One in the Chamber,” while “We Are the Devil” breaks the tempo mold with a decidedly streamlined metallic punk riff sensibility that has the band attacking on a unified sonic front to near immaculate effect and “Northern Lights” wraps the album up in epic fashion with a rendering of a blazer-clad Ken Andrews fronting Refused.

Trillionaire, in addition to having an awesomely awesome band name, has laid down a solid introductory statement with Romulus. Though there is plenty of talent at work, the undercurrent dragging at them appears to be some amount of debut album indulgence when restraint is called for. Given who’s involved, however, one can’t help but have confidence that the bugs will be ironed out going forward, especially as post-release downtime realizations set in and they themselves start wondering about how to shore up the meandering impenetrability in the pursuit of more commanding and poignant songs. ~ Kevin Stewart-Panko