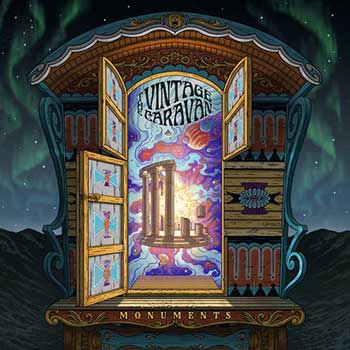 MODERN CLASSIC PROG ROCK: The Vintage Caravan is an anomaly in that the trio from Álftanes, Iceland is one of the more conventional sounding bands to emerge from the land that prizes oddball individuality that the rest of the world happens to latch onto. Monuments sees the trio five albums in and taking their classic rock (Led Zeppelin, Rush, Deep Purple, Cream, Black Sabbath) and seismic metal influences (High on Fire, Mastodon, The Sword) and ratcheting up the mix with improved hooks, anthemic choruses, and other conventional tools that result in a record that possesses more infectious qualities, more for the listener to hang their hat on, more for listeners to come back to, and, most importantly, more to draw the listener back in.

Album opener “Whispers” rides a drumline beat between movements of massive choirs of power chords, a shuffling strut, walking Cliff Burton-esque bass licks, and a psychedelic wash of a chorus to a dynamic conclusion. “Crystallized” is a roller coaster of hard rocking hooks, 70s proto-metal thumping, a smooth jazz midsection, proggy guitar fills, and a chorus that stands head and shoulders above anything the classic rock heroes of yesteryear have written since yesteryear. It might read as a disparate mess on paper, but in actuality it’s arranged to flow with the ease of butter sliding across a hot pan. Vocalist/guitarist Óskar Logi Ágústsson shows his mettle by caressing ears with Geddy Lee-like vocal phrasing while holding down the pendulum between jazz and hard rock (and an absolutely transcendent late-song bridge and layered outro) on “Can’t Get You Off My Mind” and the enormously catchy chorus anchoring “Dark Times.”

What’s exciting is that the above mentioned songs are only the album’s first four tracks. They hit you with all those rocking and exploratory good vibes before taking you on an emotional and touching tribute via the ballad “This One’s For You.” Then, they introduce the dust up between streetwise dungaree rock and ELO’s slick melodies that feature on “Sharp Teeth” and “Forgotten,” the traditional lamentation of “Torn in Two,” the harmonious Blues Brothers meets High on Fire power punch of “Said Done,” and the melancholic (primarily) acoustic/piano/vocal ballad that is “Clarity,” which rounds out an album that is destined to feature highly as one of the year’s best. And one that scores another positive point for the land of fire and ice. ~ Kevin Stewart-Panko