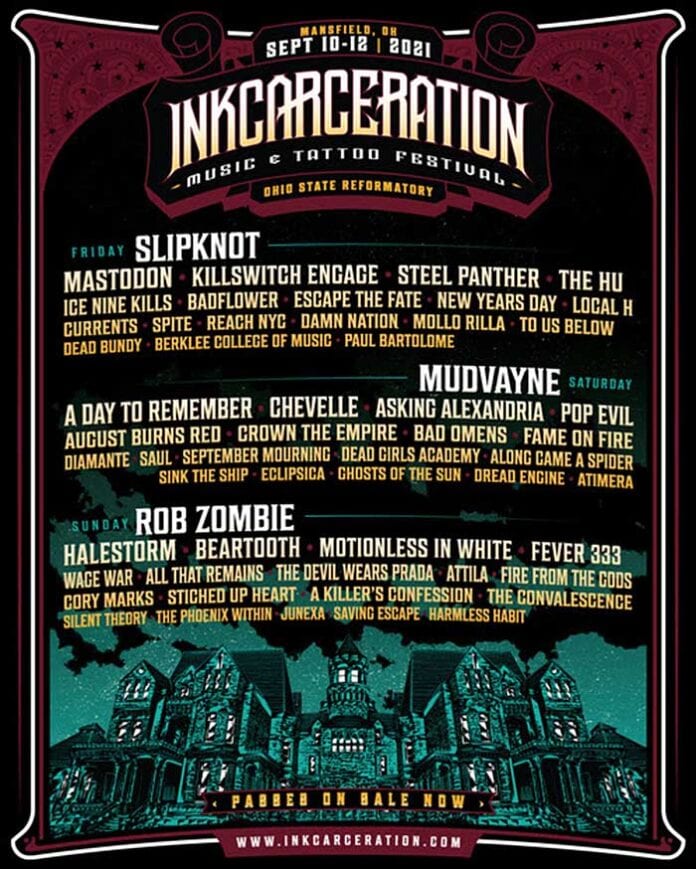 Single Day & Weekend Passes Are On Sale Now At www.Inkcarceration.com

Inkcarceration Music & Tattoo Festiva lreturns for a third year this fall with a massive lineup featuring some of the biggest names and brightest new stars in rock, metal, and more converging in Mansfield, Ohio on September 10, 11 & 12 at the historic grounds of the Ohio State Reformatory (made famous by the movie The Shawshank Redemption).

Headliners for Inkcarceration include Slipknot, Rob Zombie and Mudvayne –marking the first show in 12 years for the band, who recently announced their long-anticipated reunion in 2021. The talent-packed lineup also includes A Day To Remember, Mastodon, Halestorm, Chevelle, Killswitch Engage, Beartooth, Motionless In White, Asking Alexandria, Steel Panther, Fever 333, The Hu, Pop Evil and many more.

Single day and weekend passes for Inkcarceration 2021 are on sale now at www.Inkcarceration.com, starting at $75 plus fees.

Clown from Slipknot said, “After 20+ years on the road, it’s always wonderful to experience new things. We are excited to be a part of Inkcarceration Music & Tattoo Festival. It will be great to get back out there and be with our family again. Stay safe and see you soon.”

Adds Danny Wimmer, founder of Danny Wimmer Presents, which recently announced a new partnership with the creators of Inkcarceration to stage the festival, “We know firsthand what it’s like to grow a high concept festival from scratch, and the challenge of taking a great event to the next level. It always starts with the music, but you also need to create a great experience. We’ve been so impressed with Inkcarceration, and how quickly it became a must-see show on the festival calendar. Tattoos are such a central part of the rock n’ roll lifestyle – something that fans are always talking about on our own socials – and it’s such a unique location. I’ve toured the Ohio State Reformatory, and it’s an experience you don’t want to miss. DWP is excited to have the opportunity to bring Inkcarceration to that next level.”

The current Inkcarceration Music & Tattoo Festival 2021 lineup is as follows (subject to change):