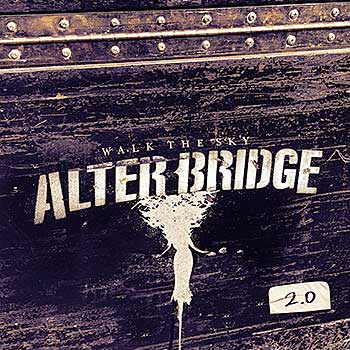 MODERN ROCK: Alter Bridge has been synonymous with melodic hard rock since its 2004 formation. Featuring vocalist/guitarist Myles Kennedy and ex-Creed members guitarist Mark Tremonti, bassist Brian Marshall, and drummer Scott Phillips, Alter Bridge is one of the most popular modern rock bands around today. Due to the unexpected global pandemic, Alter Bridge had to get creative with its normal band activity after the cancellation of their entire 2020 touring schedule by releasing its new seven song EP, Walk the Sky 2.0.

Album opener and brand new track “Last Rites”—written, recorded, and completed entirely during the Covid-19 lockdown—was initially started during the Walk the Sky sessions. Decorated with that classic heavy chugging Tremonti riff, Kennedy’s soaring vocals, and a slamming rhythm section, “Last Rites” fits right in with the rest of Alter Bridge’s material and keeps the listener engaged from start to finish.

The six live tracks were recorded from various shows throughout the band’s Walk the Sky tour earlier in the year and were handpicked by the band’s longtime producer Michael “Elvis” Baskette. These live tracks do a decent job of capturing the engaging energy of an Alter Bridge concert. “Native Son,” which was recently released as a single with a spectacular animated video, is performed with perfect precision, while the explosive intro of “Wouldn’t You Rather” is equally impressive. The audience reacts splendidly to “Dying Light” and “Pay No Mind,” making these tracks highlights of the album.

Although Walk the Sky 2.0 is a decent little package, it’s not necessarily essential, as someone who already has the original Walk the Sky album has these songs already, minus new track “Last Rites.” However, it serves its purpose by satiating its fans until the band can make a new record and hopefully get back on the road. ~ Kelley Simms