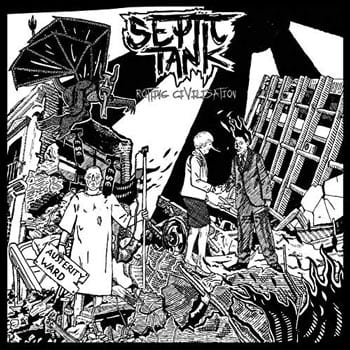 CRUST: Originally shat into existence in 1994, Septic Tank’s ranks were filled by Cathedral’s Lee Dorian and Gaz Jennings plus Repulsion’s Scott Carlson and Trouble’s Barry Stern, who wanted to embrace their collective charge of Discharge-esque hardcore. Having reconvened in 2012 with At Dusk’s Jaime Gomez Arellano taking over behind the kit from the departed Stern, they dropped a Japanese only 7-inch EP, and in 2018 have returned with their first full-length. In doing so, they have certainly tapped the vein that initially inspired them, cramming 18 tracks into less than 40 minutes, most of which are short and suitably spiky. The snag is that somany other bands have done this—and better—in the interim it’s hard to really give a proverbial fuck. It’s not that they’re insincere, there is undoubtedly passion there. It’s more a case of being inconsequential. They have Xeroxed the template of this style of music so exactly it too often comes off as trite, most obviously with the lyrics to “Social Media Whore,” which really is so redundant after more than a decade of such platforms being taken to task by hardcore bands. There are still some good moments to be found, the gruff “Walking Asylum” and 57 seconds of “Fucked” both hit the spot, but really, that’s not saying much. ~ Dan Slessor