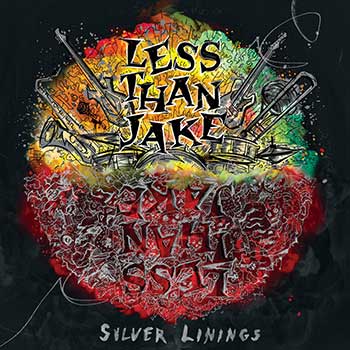 EXPERT LEVEL SKA PUNK: Though 2020 has been one hellacious bastard of a slog, new Less Than Jake music somehow makes things a little better, especially when it’s released as this year mercilessly comes to an end—unless we wake up on January 1 in some type of a Groundhog Day situation, which, given how these last 12 months have played out, is a real possibility. But if that’s the case, at least we have some new Less than Jake music as a soundtrack to those never-ending days.

Silver Linings, the band’s ninth full-length and first ever release without co-founder and drummer Vincent “Vinnie” Fiorello, who left the band in 2018, is a refreshing blast of classic ska punk, something we all need right about now since the world has gone to hell in a handbasket. With Silver Linings, the beauty is in its simplicity, as these tenured vets don’t set out to reinvent the wheel. Their sonic formula has always worked, so if it ain’t broke, then why fix it? Listening to Silver Linings, you’d never really imagine this band hasn’t released a full-length since 2013.

Caffeinated riffs, sparkling harmonies, and exuberant horns are the name on the game across the board. Familiar opener “The High Cost of Low Living” is classic Less Than Jake, songs like “Lie To Me” and “The Test” show how expertly Less Than Jake has honed its signature sound, “Dear Me” and “Monkey Wrench Myself” up the punk quotient with fast paced riffs and bouncy hooks, “King of the Downside” is incredibly fun and utterly defiant (“If I stay true, you know you just can’t break me down,” the band proclaims), and “Lost At Home” and “Bill” offer up nostalgic ska in all its early Warped Tour parking lot glory.

While 2020 has been hard for everyone for a number of reasons, music has long provided an escape. And a record like Silver Linings and a band like Less Than Jake afford us the opportunity to do just that. Plain and simple, Silver Linings is a fun record. ~ Brian Campbell