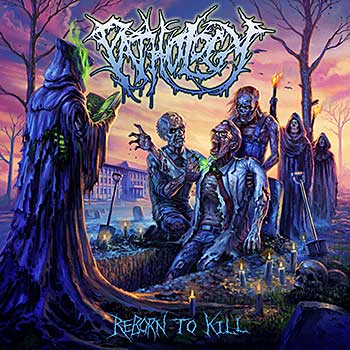 BRUTAL DEATH METAL: Rabid fans of Pathology listen to the band for one reason and one reason only, to get thoroughly pummeled by an onslaught of slamming blastbeats, murderous guitar riffs, pulsating grooves, and indiscernible guttural growls from hell. The vicious foursome has been churning out quality grotesque music for 13 years and continues its destructive path with its 10th full-length album, Reborn to Kill. Consisting of original drummer Dave Astor and a whole new lineup of new recruits—guitarist Daniel Richardson, bassist Richard Jackson, and vocalist Obie Flett—the band has created 12 short and furious aural assaults of brutality.

Reborn to Kill has less of a slam metal element that the band has displayed on previous releases and more of a groove based rhythm. In the vocal department, former vocalist Matti Way had a unique higher pitched vibrato pig squeal kind of a growl, whereas newcomer Flett displays a more lower-end guttural monstrosity. But the man can growl, most notably on tracks “Forced Regression” and “Frothing at the Mouth.”

Astor’s drumming remains the engine that drives the machine. With his numerous blastbeats, gravity blasts, furious fills, and thunderous double kick onslaught, his limbs are in constant motion throughout the 34 minute album. The song structures are tight and furious with a robust and crisp production, with the guitar and drums playing a prominent frontal assault in the mix. In addition, there’s always that one hooky riff or segment that stands out in each track.

Although staying true to the genre and their particular style, Reborn to Kill doesn’t stand out as much as their last two albums—Throne of Reign and Pathology. However, this is what fans have come to expect with Pathology, so it’s right on the mark for the ones who still dig this band’s style. Fans of Devourment, Suffocation, Autopsy, and brutal death metal in general will have a heyday with Reborn to Kill. Standout tracks are “Pit of Bones,” featuring guest vocalist Trevor Strnad of The Black Dahlia Murder, “Crematorium Flames,” and album closer “Celestial Condemnation.” ~ Kelley Simms