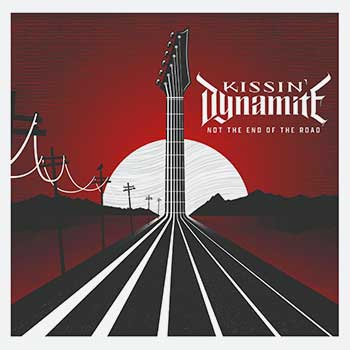 KISSIN’ DYNAMITE
Not the End of the Road

POSITIVELY POSITIVE HARD ROCK: Entering the foyer for the first time at the party hosted by German rockers Kissin’ Dynamite, according to sources, this rager has been raging since 2007 (and five years before that when they were known as Blues Kids), has unleashed six albums onto the public, and has resulted in the quintet from Reutlingen spending their fair share of time on the German charts and stages around the world.

Truth be told, as the scene gets scanned in the city tonight, Kissin’ Dynamite isn’t a band hell-bent on revolutionizing hard rock’s wheel or doing anything that hasn’t been heard a million times since the days of Mötely Crüe’s Too Fast for Love or when the members of Guns N’ Roses were arguing over hot dog buns and toilet wine as a form of sustenance. What Kissin’ Dynamite does to separate themselves from the pack—giving them a praiseworthy edge in a saturated music world—is approach their brand of anthemic, hard rockin’ heavy metal with an attitude and sound baked in sunshine, swimming in major key brightness, teeming with soul elevating positivity, and radiant sing-along majesty. Seriously, try and not have your icy heart thawed after listening to lead-off single “Good Life” (the video itself rivals a NBA sideline for the amount of high-fiving and hugging in one place), even if all the riffing was originally done by Skid Row, Accept, Krokus, Hanoi Rocks, and Dokken.

In spite of that, this is an album you can’t help but smile through in that it’s home to flagon foisters like “What Goes Up,” the Freedom Call inspired ear worm of “Coming Home,” and “Voodoo Spell,” which bridges classic Journey with whatever the heck they’ve been doing with Steve Augeri and Arnel Pineda as frontmen. As one might imagine, not only does Not the End of the Road give the 43 facial muscles involved in smiling a workout with epic, lighter waving ballads like “Scars” and the stadium savvy “All for a Halleluja,” it’s not afraid to have a little down ‘n’ dirty fun with elbow to the ribs cock rockers “No One Dies a Virgin” and “Yoko Ono.” This does nothing to speak to the massive, training scene feel of the title track during which images of Sylvester Stallone hitting the speed bag and racing Carl Weathers down a beach will compete with Survivor rehearsals for listeners’ brain space.

There is a handful of spots during the album’s second half where even the band’s immaculate dedication to positivity can’t inject enough energy into the likes of “Defeat It” and “Gone for Good” to elevate them beyond the Sunset Strip scrap heap, but overall, Not the End of the Road is an above average bristling stepped in a tingly, feel-good glow that obscures any of its radio ready cheesiness with the broad potential to land with a distraught and exhausted public that has been put through the wringer for 22 months (and counting). ~ Kevin Stewart-Panko