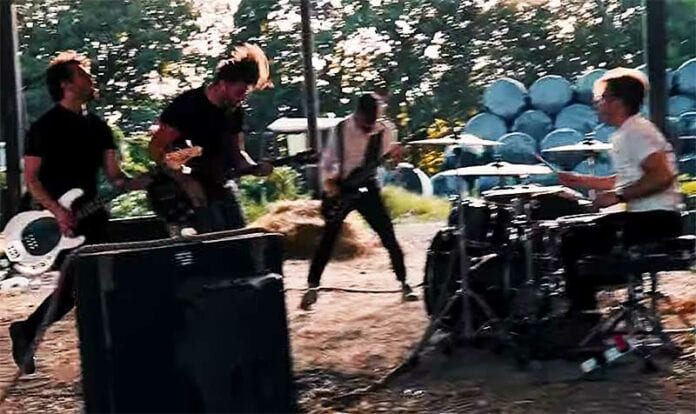 WATCH THE EXCLUSIVE VIDEO PREMIERE OF THE ALCHEMY’S “WE’RE ALL JUST CRIMINALS” ON OUTBURN.COM

“We’re All Just Criminals” is the second single from The Alchemy’s upcoming full-length record Chemical Daydream out November 8th on Standby Records.

Crafting catchy and anthemic songs from a subconscious blend of the rock, indie and electronic musical landscape they grew up in, the Canterbury based quartet formed in 2015 and released their debut EP in April 2016. Modern Age was well received by UK independent press and radio and laid the foundation for the band’s sound: heavy riﬀs intertwined with undeniable choruses provided by the rare talent of vocalist Rhys Taylor.

Fast forward to September 2018 and after a short trip to Berlin to mix and master the record, and The Alchemy have their ﬁrst full-length album titled Chemical Daydream ﬁnished and ready to go.

Guitarist Luke Welch reﬂects on its creation: ‘‘Playing with some great other bands all around the country gave us the chance to up our game. And working with an experienced team like Paul and Sebastian Braunreuther in Berlin, along with having our own studio has meant we’ve managed to realize our creative vision and we couldn’t be happier with how this record has turned out.”

With Chemical Daydream’s rich, melodic tapestry of intricate instrumentation and hard hitting songs, Taylors huge and unique vocal performance, The Alchemy have found a way to seamlessly weave their eclectic inﬂuences into an electrifying sneak peek at UK rock to come.