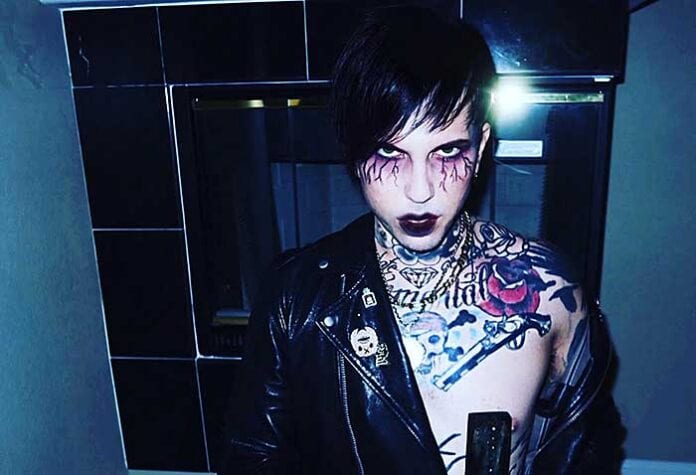 MY TOP 10 HALLOWEEN SONGS THAT INSPIRE ME!
BY MICHAEL ORLANDO OF DEAD GIRLS ACADEMY

This is one of my favorite songs. I remember first hearing this song and getting stuck on the hook. I had a crazy punk phase growing up. I was obsessed with bands like Pennywise and NOFX. However, the Misfits always appeased my darker side of punk. It definitely helped shape who I am today and inspired me musically. Misfits will always have a place in my heart! Danzig was a crazy bastard! But I loved that he commanded the stage and took no prisoners.

AC/DC is one of my favorites. I literally listen to them everyday. I first learned about them when I was playing ice hockey in Minnesota. My team used to play “Highway to Hell” to pump us up right before the game. The minute I heard the first raspy vocal I was hooked. I am told my voice has a similar rasp, which always puts a smile on my face. There is no band that starts a party like AC/DC!

VAN HALEN
“Runnin’ with the Devil”

Man, this is a hard one to talk about. Eddie passing away was a crazy day for me. Van Halen inspired Dead Girls Academy so much. I cannot tell you how many times I’ve referenced guitar riffs and, of course, David Lee Roth. I have nothing but love and admiration for this band. I really wish I had the chance to see them live.

THE ROLLING STONES
“Sympathy For The Devil”

I learned about the Rolling Stones from my mother. She is a giant fan. She always tells me I dance like Jagger on stage. Either way I definitely have his lips! I started diving into The Rolling Stones discography about a decade ago, and I really started to appreciate the musicianship of the band. Definitely a band I admire.

I had the pleasure of meeting Alice while I was on tour with John 5 in Arizona. He is a super nice guy. It’s always refreshing to meet someone you admire and have them be amazing to you. Alice is the godfather of shock rock in my opinion. His stage show inspired me so much. He inspired both Vampires Everywhere! and Dead Girls Academy. Alice is definitely the soundtrack for Halloween with a 70s twist.

I got to see Peter Murphy live in Hollywood about seven years back. He put on a fantastic show! His voice is just epic. I cannot for the life of me understand how he sings so low and evil. It must be a gift. Bauhaus 100 percent inspired various synth sounds on my past albums. If you are looking for a goth vibe, look no further!

SIOUXSIE AND THE BANSHEES
“Halloween”

No one is cooler than Siouxsie! I just found out my label owner met her and hung out with her back in the day. That is so badass! I love their sound. The bass tones in their songs are amazing. For most of you that don’t know, I used to play bass. I toured for many years as a bass player, and I always tried to match their tones.

First off, If you haven’t seen the original Pet Sematary, stop what you’re doing and watch it ASAP! It is fantastic! I’ve always loved the Ramones for their simplicity. This song is no different. This is a great vibe for some whiskey and weed!

To be honest, I got into Ozzy before I got into Sabbath. That being said, it took me many years to scratch the surface on the Sabbath discography. However, I enjoy Sabbath now more than I like Ozzy solo. There’s not much left to say on this. If you don’t like Ozzy or Sabbath please unfollow me lol. Naw, I love the guitar riffs on this song! I don’t know what they were thinking when they wrote the guitar, but to me it automatically sounds haunting and witchy. You have to respect Ozzy’s insanity. In fact I sometimes try to model it.

IRON MAIDEN
“Number of the Beast”

I got a cool story for this one! I was on Warped Tour in 2012 with my band Vampires Everywhere! There used to be this band dude from the UK who was always appearing on our bus named Austin. I was dating a porn star at the time, so needless to say I didn’t have much time with the boys. So, I didn’t really have time to pick his brain. All I know is he slept on our bus a lot and he loved our band. He was in a band called Rise to Remain. Eventually we ended up becoming close and having some crazy nights! One day he came up to me and asked if we wanted to go to the Iron Maiden show. I was, “Hell yes, of course!” We had a off day from Warped, and it matched up perfectly. So, Austin is on our bus and we are pulling up into the arena. I then noticed we weren’t going in the front entrance, we were heading backstage! I asked Austin, “Yo! Where are we going?” He’s, “To see the show, of course!” I then asked the important question, “What does your dad do?” He said he sings for Iron Maiden…Bruce Dickerson. I then put two and two together and shit myself! So, we ended up watching the show from side stage and drinking with Iron Maiden! Y’all have no idea how much respect I have for that man’s voice and stamina on stage. It was a surreal experience and one I’ll never forget.