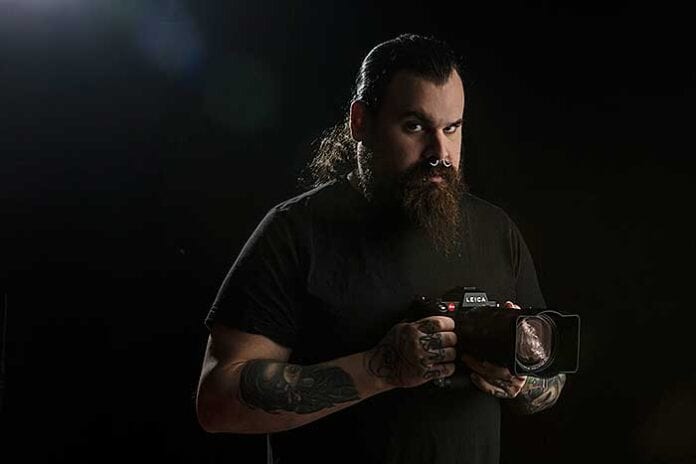 The duality of beauty and evil is wonderfully captured by professional photographer Jeremy Saffer in his massive coffee table photo tome, Daughters of Darkness. The 288 full page, full color photo book features hundreds of models, celebrities, actresses, and musicians from all over the world—wearing nothing but corpse paint.

Known for his music cover shoots and inside pages of international publications such as Metal Hammer, Outburn, Kerrang!, Revolver, and others—which includes shooting bands such as Megadeth, In This Moment, the Misfits, Slayer, and more—Saffer has carved out an accomplished career in the music photography industry for almost two decades. Published by Rare Bird Books, Daughters of Darkness is Saffer’s homage to his lifelong love of black metal and fine art nude photography.

Twelve years in the making, Saffer’s idea for his “corpse paint project”—as it was initially called—first germinated in 2008 while he was working as a part-time fine art nude model photographer and a part-time music photographer. Magically, Saffer’s two worlds collided after he shot a nude female model covered in corpse paint for a T-shirt design for a niche black metal clothing line.

“When I did that first shoot, it combined my fine art nude photography with music photography,” Saffer explained to Outburn during a recent phone interview. “It also made me think that if this was on an album cover, I’d buy it no matter who the band was. I loved the images so much that I thought I should do a series of images.” A year later, Saffer was about 50 shoots deep into the project when he released a calendar of his band photography work. Although it did well, Saffer kept shooting beyond the calendar and the next logical step was to do a book.

“After about five or six years, I started reaching out to publishers who do nude books and they all said, ‘No,’” Saffer remembers. “So, I thought that sometimes record labels put out books, so I hit up black metal record labels and black metal clothing lines, and they all said they wouldn’t do a book of nude women. So, I kept shooting it for years and years. And every year I tried to hit up those record labels and publishers again with new images, and it was a resounding ‘No’ again and again.”

After several discouraging years, Saffer slowed down shooting for the book and concentrated on other endeavors until he reached out to Rare Bird Books in 2019 with the idea for his project. And this time, someone finally said, “Yes.” “When we were going over all the details of the book of what I wanted the book to be and all these details that I thought would be annoying to a publisher, they said they wanted to do it my way,” Saffer reflects. “They really made this book out to be exactly how I wanted it to be presented with every small detail that I wanted. As a dream come true as it is, it’s exactly how I wanted it to be.”

Saffer’s love for black metal and photography initially began after discovering the music and imagery of England’s black metal band Cradle of Filth while sifting through rows of records at his local record store—like many diehard music fans will always cherish.

“The first black metal band I ever got into was Cradle of Filth,” Saffer says. “I was going to record stores flipping through records trying to find album covers that looked something like Cradle of Filth—with a nude model or something dark and evil atmospheric or something with corpse paint. And I would buy those albums not knowing who the band was because of my affinity with that kind of art and my affinity with black metal.” Fittingly, the foreword for Daughters of Darkness was penned by none other than Cradle of Filth’s Dani Filth, while the introduction was written by Lamb of God vocalist and fellow photographer D. Randall Blythe.

“I’ve loved Cradle of Filth ever since I heard Cruelty and the Beast [1998], which was the first black metal album I ever heard,” Saffer recalls. “I’ve long been a fan of Cradle of Filth and I’ve shot them so many times. Cradle of Filth’s merchandise and its imagery is both a big foundation for this book. So, having him involved is a dream come true, being the reason Cradle of Filth is why I’m into black metal.”

For the Daughters of Darkness book,Saffer also teamed up with Season of Mist record label to release an exclusive vinyl compilation as a free companion to the Daughters of Darkness Bathory, Bloody Bathory and boxed set editions of the book. Black metal imagery and music, mixed with the human nude form, has always appealed to Saffer. The beauty and beast aesthetic is more prominent in the black metal and symphonic metal subgenres, which is what makes black metal so appealing in the first place. “I think different genres of metal treat nudity differently, and not in a negative way,” Saffer explains. “If a woman is in a Cannibal Corpse song, she’s not going to have a good time in that song. And the same thing with grind or porno grind. A gore grind band like Exhumed…if a woman is in one of their songs, they’re getting cut up. But in black metal, they’re more worshiped than killed or exploited in any way.”

Saffer honed his photo techniques after graduating from the Hallmark Institute of Photography, which was an extensive 10-month program. Beginning his photography career by first shooting on film before switching to digital, Saffer feels that learning this way allows the photographer to develop long-term skills that most digital photographers might overlook.

“I started shooting on film,” Saffer explains. “I was in the darkroom, but I was also editing on Photoshop, so I learned both at the same time. I think learning on film is a priceless thing that most photographers should learn on first. It teaches you to get it right on the camera. It teaches you to hone in on everything right, prior to going into postproduction. Whereas if you learn completely digitally and learn to be a Photoshop photographer, you’re going to spend so much time in postproduction verses doing more shoots. I’d rather do more shoots than more editing.” Over the years of shooting well-known rock and metal bands, Saffer has accumulated some interesting stories. Some of his favorite subjects to shoot include Dave Mustaine of Megadeth, Ash Costello of New Years Day, Maria Brink of In This Moment, and Alissa White-Gluz of Arch Enemy, to name a few. However, due to the uncertainty of the ongoing pandemic, bands and music industry workers of every kind have been out of work since March, including Saffer.

“Our industry has been hit the hardest and everyone has to get creative on how they can do something,” he explains. “My next book—my band photography book that I want to do—is to not just show band photographs but behind the scenes. If Daughters of Darkness does well, hopefully there’ll be a sequel to that. I don’t know when I’ll get back to full-time shooting, so I’ll have to get creative on how to pay the bills and stay afloat. So far I’ve been making it, but we’ll see how it goes.”

GHOST: The End of Cardinal Copia and The Future of Ghost