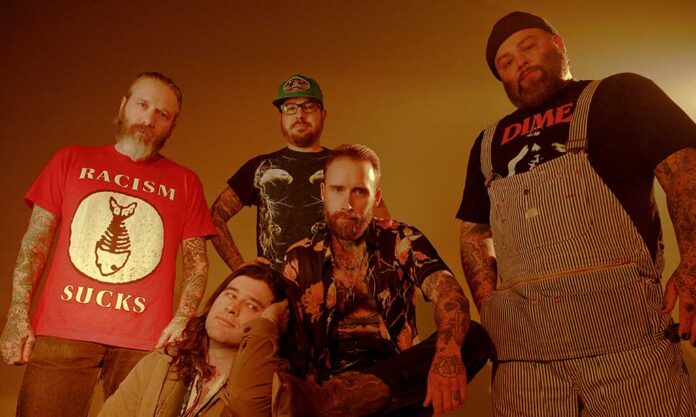 ALEXISONFIRE HAS ALWAYS BEEN THE PINNACLE OF THE HARDCORE GENRE, setting the bar high for other bands and fans. From the unique presence of three vocalists to their multigenre, aggressive yet honest approach to the band’s latest album, Otherness, their gold and platinum status has led to countless accolades of their success within themselves and their music as a whole. Vocalist Wade MacNeil reveals that while he appreciates everything they have attained throughout their career, growth is still the most important thing to the band.

“Growth is the most important thing to us as a collective of people,” Wade responds introspectively. “The artist that we admire the most, the artists that have had the most impactful careers are bands that continue to challenge themselves. They don’t just become a photocopied version of what they started with. We really push ourselves record to record, and I think this was the largest step forward. A lot of that is because we stepped away from it. We grew not only musically but emotionally. We were able to bring all that back so we could make this record. You can hear that growth and even see that we are more connected than we have ever been. It’s important to me and special.”

“THE ARTISTS THAT HAVE HAD THE MOST IMPACTFUL CAREERS ARE BANDS THAT CONTINUE TO CHALLENGE THEMSELVES.”

While growth continues to be the centerfold that binds the members of Alexisonfire together, so does the topic of otherness. It has not only passionately graced their career throughout four studio albums, but also grown and matured with their new full-length, Otherness. It has not only been the driving force behind their albums, but a vital part of the listening experience. 2004’s Watch Out and 2006’s Crisis were emotionally intelligent albums that turned heads in the scene and earned their platinum certification that confirmed their weight in relevance. For the creative process of Otherness, Alexisonfire took brought back that emotional resonance. However, it was a very different experience making and producing this album compared to their past releases.

“It’s always been a very collaborative effort by all of us, but we found a better way to do it,” replies Wade. “Being able to communicate better and being vulnerable with one another. And Honestly? Being kind to one another. Maybe that’s an obvious thing to be kind to bandmates, but I don’t think it was obvious to us for a long time. We treated each other like we were players on a hockey team. We loved each other, but we were also mercilessly making fun of one another. That was as close as we would get to showing we truly loved each other. We were being pretty rough with one another for a long time. This time around, we changed the mood of everything we did. We were able to talk about what we wanted to accomplish and how we could move forward in a better way. Everyone opened up, contributed more, and wanted to do things we’ve never done. Before, we would have second guessed ourselves, would have been afraid to put those ideas into the room, and didn’t know how those ideas would be received. We shattered a lot of that, and it allowed us to take chances on things we never tried before. We allowed ourselves to be the band we always wanted to be.”

“WE CHANGED THE MOOD OF EVERYTHING WE DID. WE WERE ABLE TO TALK ABOUT WHAT WE WANTED TO ACCOMPLISH AND HOW WE COULD MOVE FORWARD IN A BETTER WAY.”

Alexisonfire has felt the freedom and new opportunities derived from their new record, Otherness. It was not just making and producing another record, it was a way for all of them to find their way back to each other as musicians and as friends.

“We found this way for the three of us to sing together all the time instead of it being, ‘it’s Dallas’ spot,’ ‘it’s George’s spot,’ ‘it’s Wade’s spot.’ It was a way to blend three of our voices constantly. There is really nothing we can’t do at this point, which is a wonderful way to leave the recording process. To leave the studio feeling that, I felt like we did something special.”

Alexisonfire was in a complicated space before Otherness came into existence. They are no longer the band that said goodbye to their fans in 2012, nor are they the touring band that came back in 2015. The band is confidently stronger and better than ever, and Otherness is evidence of that.

“We are playing better than we used to,” smiles Wade. “We are enjoying this more. Every little thing we are doing right now feels good. It feels like a step forward in what the band can do and what can be. We want to do it, our lives feel better with this in it.”