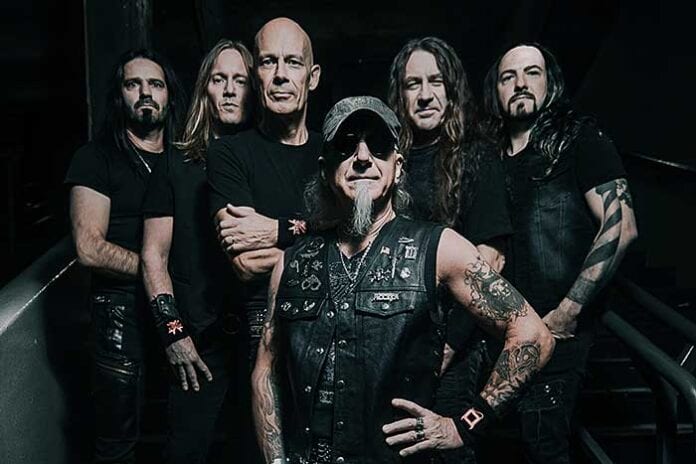 Ever since Teutonic heavy metal titans Accept were resurrected in 2010 with a new singer and a new record in Blood of the Nations, the band has been on a roll, releasing a new record every two to four years. On its 16th full-length album, Too Mean To Die via Nuclear Blast, the newly founded sextet—featuring vocalist Mark Tornillo, original guitarist Wolf Hoffmann, drummer Christopher Williams, guitarist Uwe Lulis, bassist Martin Motnik, and guitarist Philip Shouse—has crafted 11 classic trademark Accept anthems.

Formed in 1976 in North Rhine-Westphalia, Germany with charismatic frontman Udo Dirkschneider, Accept has been through many ups and downs throughout its existence. Eventually, Accept started to break in America with its 1983 Balls to the Wall album, which became the steppingstone for the band.

“It was never easy to break through in the music market,” Hoffman explains during a recent phone interview. “It isn’t today and it surely wasn’t back then, especially being from Germany—that didn’t help at all. It was almost impossible to have worldwide attention or find worldwide success back then. It was a struggle, even in the beginning. Nothing ever happens overnight.”

Accept’s endurance and perseverance throughout its four-plus decade existence—and especially during the global pandemic of 2020—the Too Mean To Die album title is the perfect analogy to describe the band.

“WE’RE THE METAL WARRIORS, WE’RE GOING TO LIVE FOREVER. NO VIRUS CAN KILL US.”

“It wasn’t really meant to be autobiographical. I think it was mostly meant as a cool statement during these pandemic times,” Hoffmann states. “We just said, ‘We’re the Metal Warriors, we’re going to live forever. No virus can kill us.’ We’ve already had a song called ‘Pandemic,’ which we still play live every show, and the last album was called The Rise of Chaos. It felt like a good title. We had the title first and then wrote the song to it.”

Too Mean To Die was once again produced by prolific knob twirler and current live Judas Priest guitarist Andy Sneap, who has produced every Accept album since Blood of the Nations. By now, Sneap has the band’s sound down pat and knows how to bring out its classic Teutonic metal aesthetic.

“He does,” Hoffmann agreed. “It’s a great working relationship and it feels very comfortable for all of us. We can trust him totally with the sound and we can trust his judgment. And he knows us really well, too. It’s working like it should, and there’s really no need for us to even look for anybody else because it works that well. He’s always pushing us to these somewhat more Germanic Teutonic bits and pieces that I myself sometimes aren’t even that aware of necessarily, but he reflects right away on that stuff.”

Accept fans were surprised and rightfully bummed when original bassist Peter Baltes left the band in 2018. However, the musical chemistry and camaraderie within the current lineup is better than ever.

“I’M THE ONLY SURVIVING ORIGINAL MEMBER, WHICH IS SOMEWHAT ODD AT FIRST, BUT I GOT USED TO IT NOW”

“Of course, now I’m the only surviving original member, which is somewhat odd at first, but I got used to it now,” Hoffmann says. “It’s been two years now that Peter left, we’ve been in the band for like 40 years, but you could tell he wasn’t 100 percent happy in the band anymore. So having a new guy who is completely happy and who’s full of excitement and full of enthusiasm, that brings some new energy into a band every time. It was really great to have these new guys in the band and there’s definitely good chemistry for sure.”

On Too Mean To Die, Accept has now become a three guitarist band—á la Iron Maiden. With this new formation, it opens up more colorful musical opportunities for Accept.

“It really came about during our tour two years ago when we played with an orchestra all across Europe [Symphonic Terror with the Czech National Symphony Orchestra], and we had Phil Shouse as a sit in player because our other guitar player Uwe [Lulis] wasn’t available. So we found out what a nice guy he is and how well we get along on stage and backstage. We didn’t want to let him go when the tour was finished.”

Besides, according to Hoffmann, there’s no law against having three guitar players in the band.

“The sound is not going to change dramatically, but it’s going to open up changes a bit and it’s going to make it a bit more interesting on stage,” Hoffman continues. “And even on the record, having Phil as a guitar player in the band, we gave him some space on this album for him to really bring in a different touch to these songs. And I think it all adds up. It adds another color to the whole thing.”

“Symphony of Pain” on the new record has a classical music structure that works so well within the band’s metal framework. In fact, Hoffman’s affinity with classical music goes way back to Accept’s 1985’s Metal Heart record. Even his two solo albums, 1997’s Classical and 2016’s Headbangers Symphony, focused on symphonic metal.

“THIS WOULD BE THE PLACE IF EVER TO SMUGGLE A LITTLE BIT OF REAL SYMPHONIC ELEMENTS INTO IT.”

“I love that catchphrase, ‘Symphony of Pain,’ Hoffmann begins. “I finally came up with some riffs and some stuff that I like before it came together. Then I thought, well, this would be the place if ever to smuggle a little bit of real symphonic elements into it. So I found these Beethoven pieces that every kid in the world knows—the fifth and the ninth symphony by Beethoven. And it always seems to work when it’s not forced in, you’ve got to be careful. But when it works, it works really well. So we ended up writing that whole song completely about Beethoven, even in the lyrics.”

Plus, instrumental album closer “Samson and Delilah,” an adaptation of a well known classical piece, serves as the perfect outré for the whole album.

“I wasn’t even sure it was going to be on the album,” Hoffman admits. “I just had it sitting there and I played around with it, because that’s also classical music, by the way. It could have been on a solo album or something, but Andy Sneap was pushing for it. He thought it would make a good addition to the album because it’s very heavy and it doesn’t sound overly classical at all. If you didn’t know it, you would never guess it’s actually based on classical music but it is. It sounds so metal and so brutal with that drum beat and everything that we all figured, and especially Andy thought, that it’s a good little addition to the album.”

Due to the ongoing global pandemic and tours still postponed indefinitely, who knows what the foreseeable future holds for Hoffman and Co. However, creativity and motivation is still high on the list within the Accept camp.

“Well, I’ll answer with a song title, ‘The Best Is Yet To Come,’” quotes Hoffmann from one of Accept’s newest tracks. “And I totally believe that. I wasn’t kidding when I was writing the phrase for that song, because who’s to say that the best isn’t ahead of us, especially when all this COVID-19 crap is over. I’m thinking personally as an artist, the best show we haven’t played yet, or the best song hasn’t been written yet. And that’s what motivates me.”

BORKNAGAR: A Constant in This Wild World