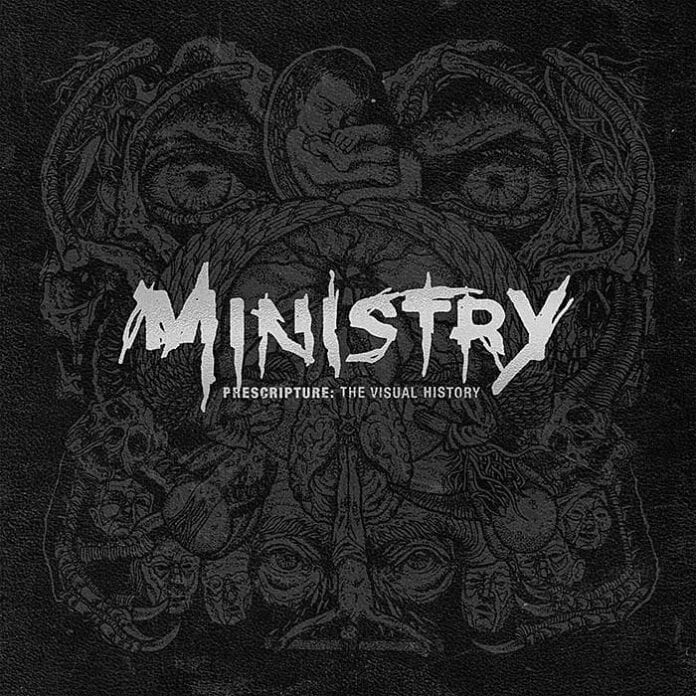 I really cannot think of a more iconic, revolutionary, controversial, and monumental band in industrial metal music history than Ministry. To me, the band itself is so deeply rooted and encompassed in the visual aspect of music that it comes as no surprise that throughout the band’s impressive history there is enough content to fill an entire book. Quite a long sentence there, aye? Ministry’s history is even longer than that, I promise.

From the band’s official biography: “Born in 1981 in Chicago, Ministry has been the lifetime passion project of founder Al Jourgensen, considered to be the pioneer of industrial music. In its early days, Ministry was identifiable by its heavy synth-pop material in line with the new sounds and technology that were being developed in the 80s. Ministry’s output began with four 12-inch singles on Wax Trax! Records in 1981 before the first LP With Sympathy in 1983 via Arista Records. As time progressed however, so did Ministry, quickly developing a harsher, and more stylized sound that the band soon became infamous for on seminal albums Twitch (1986), The Land of Rape and Honey (1988), and The Mind Is A Terrible Thing To Taste (1989). With the release of Psalm 69: The Way to Succeed and The Way to Suck Eggs (1992), Ministry hit an all time high in the mainstream musical realm and received its first Grammy nomination. In total, Ministry has been nominated for a Grammy award six times. After an indefinite hiatus in 2013, Ministry’s 2018 album, AmeriKKKant, continues to reflect Jourgensen’s views on the frightening state of society and politics. Ministry continues touring and recording in 2020 with new music and more planned.”

I met the author, Aaron Tanner, during my photoshoot with Al Jourgensen for AP Magazine. Aaron is no stranger to visual histories, having also authored a visual history for Pixies and other artists. I could immediately feel his passion for this project as he sat down with Liz Walton to dig through old negatives to find exclusive, never-before-seen photographs of the band. This book is littered with them, photographs that even the most devoted fans have never seen before, making Prescripture a gem in and of itself. Alongside photographs are screen print concert posters from over the years, equally as interesting. The framing of each page is something to note as well, with each image surrounded by a diverse variety of lyrics, doodles, sketches, and more.

The visual aspect of the book is brilliantly bordered by the quotes featured inside. The book opens with an introduction from former Dead Kennedys’ frontman Jello Biafra, an individual who is well versed in the musical act, a friendship that goes all the way back to Chicago and the Wax Trax! Records days. Many musicians lent their words to this book, expressing their thoughts on Ministry, Al, and the entire history of the project itself. Many familiar names find themselves featured in the book, with some unexpected ones as well. It was just as pleasant to flip through the written tidbits as it was the photographs, a surprise awaited on every page.

The book itself is a hardcover and a serious one at that, commanding respect in how beautiful it is bound and produced. The pages are thick and vivid, printing that even the most snobby creative can appreciate. This exclusive book is limited to 2000 copies and also has a deluxe edition (500 copies only) including a t-shirt and vinyl single. Both versions are very well done, but the vinyl slip in the deluxe edition is especially beautiful.

Having been born in ‘94, I missed a large chunk of Ministry history, all of which was brilliantly laid out for me in Prescripture. As a photographer, being visual is second nature, and I can (maybe partially from a biased standpoint) tell you that photographs really do speak louder than words. Photography immortalizes a moment, a feeling, and reflects on the history of that era. Flipping through this book, I feel caught up on Ministry’s entire world without needing a single word to guide me along. Not only that, I feel that I understand who Ministry are.