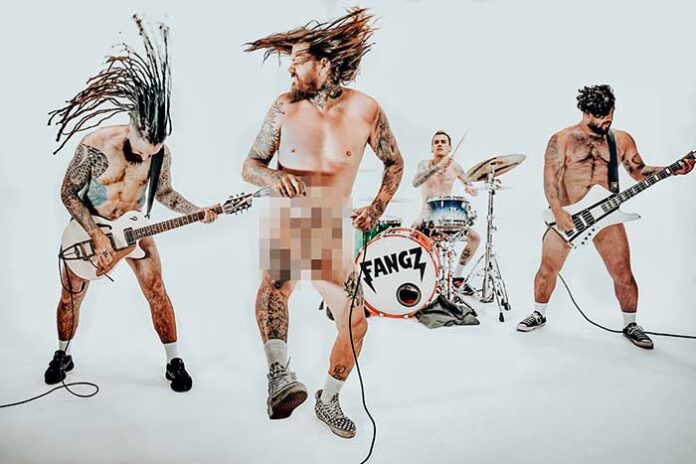 WATCH THE EXCLUSIVE PREMIERE OF FANGZ’ NEW SINGLE AND MUSIC VIDEO FOR “FALLING IS PRETTY NORMAL” ONLY ON OUTBURN.COM

Sydney based punk quartet FANGZ has today revealed their new single and music video “Falling Is Pretty Normal,” the title track and final single from their third studio EP—produced by Stevie Knight (Yours Truly, Stand Atlantic, The Dead Love) and mixed by James Paul Wisner (Paramore, Underoath). Beginning with viscous guitars and a snare roll crescendo, the song is a thundering release of cathartic energy, highlighted by the band’s melodic aptitudes.

Alongside the single is the nostalgic accompanying video—filmed, directed, and edited by Rhys Bennett of High Voltage Photography—that pays homage to the blink-182 classic “What’s My Age Again?” The video features the band members performing their new single and running naked around various locations in Sydney’s Inner West. With eccentric hilarity and multiple cameos, the buoyant video contrasts the song’s heavier themes.

The band will also be donating the proceeds from the YouTube royalties and a percentage of t-shirt sales to the Cancer Council Australia—a small tribute to everybody’s favorite bassist Mark Hoppus.

“‘Falling Is Pretty Normal’ was written just after I lost someone close to me,” says vocalist Joshua Cottreau on the new track. “I wasn’t coping at all, and I found myself spiraling without even realizing. I would have these vivid dreams in which the departed would be there and it’d feel so real. In that moment I’d be happy. Then my alarm would sound, and reality would hit me like a ton of bricks. It’s about learning to deal with loss and knowing that the person may be gone but the lessons they taught you still live on as long as you remember.”

FANGZ is punk rock band that write songs with the sole purpose of getting people to party and attempt backflips in mosh pits. The band started their journey with a four week sold out residency in Sydney’s inner-west, with lines of punters spilling out onto the street trying to get into the venue.

Influences and Essentials: A Beginners Guide to BOMBER