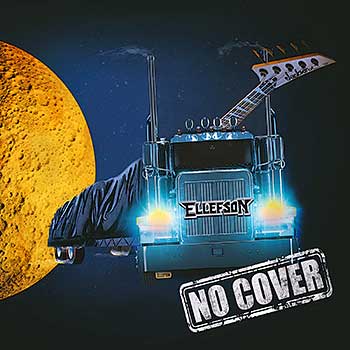 While recording a few cover songs for B-sides and bonus tracks for his upcoming Ellefson solo LP (due out in the Spring of 2021), Ellefson and his band, Thom Hazaert (vocals), Andy Martongelli and Ron “Bumblefoot” Thal (guitars), and Paolo Caridi (drums), decided to create enough cover songs for an entire album.

Throughout the record, there are many different contributions and individual personalities that shine through. Although Hazaert is the anchor singer for the majority of this release, prominent guest singers fill out the rest of the tracks doing trade-off verses, duets, and backing harmonies. And the tracks where various vocalists along with Hazaert in tandem makes for a pleasing and different dynamic. The album kicks things off with an explosive rendition of Judas Priest’s “Freewheel Burning” as Hazaert and Jason McMaster (Dangerous Toys, ex-Watchtower) form a lethal vocal tandem that adds a real unique quality to this classic track. Ellefson’s love of early Def Leppard was the impetus for covering “Wasted” from 1980’s On Through the Night, as well as paying homage to that album cover with his own rendition for this record’s artwork.

Some of the biggest surprises on No Cover are “Auf Wehdersehen” by power pop rockers Cheap Trick featuring Al Jourgensen of Ministry on vocals, “Not Fragile” (Bachman-Turner Overdrive) with Hazaert singing, and “Sweet FA” by Sweet featuring Todd Kerns (Slash & The Conspirators). For the most part, every track seems to work in its own unique way, especially with the different vocalists on offer. Tracks such as “Nailed to the Gun,” “Tear It Loose,” and Fastway’s “Say What You Will” allow Haezart’s voice to add a necessary weight to the vocal performance.

There are also some rather cool moments with several of the guitar solos. Eddie Ojeda gets to handle the solo, originally done by Jay French, on this rendition of Twisted Sister’s “Tear It Loose,” while Russ Parrish (Satchel from Steel Panther) gets to solo on Fight’s “Nailed to the Gun,” in which he was a part of with Rob Halford back in the 90s.

All in all, Ellefson’s No Cover is a fun record that pays homage to some of his heroes with killer renditions of timeless classic tunes. ~ Kelley Simms