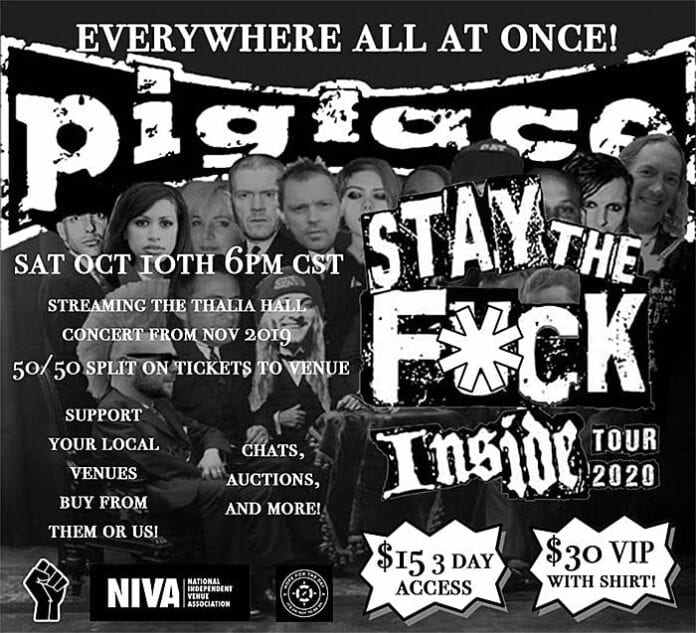 Industrial/experimental supergroup PIGFACE has partnered with venues around the world to offer fans a unique opportunity to view the band’s massive return to Chicago last year while also supporting struggling music halls with the Everywhere All At Once stream.

Forty venues so far have signed on host the October 10 virtual concert, which is part of the Stay the F*ck Inside project. Each venue will host in its own way, with some holding responsibly distanced viewing parties complete with themed cocktails and some offering links to view at home.

“With each passing week, the diverse unique community we created onstage and off seems more and more important, and the ability to share this while helping venues is all the more important.,” says PIGFACE and Stay The F*ck Inside founder Martin Atkins.

Each venue has a unique ticket link and will receive 50% of their sold tickets through a partnership with NoonChorus. PIGFACE will also make a donation to the National Independent Venue Association (NIVA) and distribute proceeds to the band’s crew, agent, band members, as well as a fund to replenish work permits issued that were paid for and now out of date. Each participating venue will be featured on the back of the PIGFACE “tour” shirt.

Prior to the streams, PIGFACE will take part in a live ZOOM chat. Opening artists will include Project 44, Curse Mackey, Ruby, Dog Tablet and Worm. Fans can also participate in a live auction featuring rare PIGFACE items, shirts from the Omertà clothing company and much more, with 50% of proceeds going to BLM, Hope For The Day and more. The stream will begin at 7 p.m. EDT/4 p.m. PDT.

Atkins started the Stay The F*ck Inside project six months ago and has since done presentations for the Greenbelt Festival, DePaul University, In Place of War, Cutting Edge Music Festival in New Orleans and the Global Change-Maker Summit in Manchester, UK. The project has been supported by assistance from the vibrant music business program at Millikin University, where Atkins is a staff instructor.

“We’re just a small team here at Invisible Records,” Atkins says. “But with alumni and current students from the music business program at Millikin University we are making it happen.”

He continues, “It seemed a natural extension to take that idea on the road virtually. Have we solved the problem? Well, no, but at least we hope we’ve shown our venue partners that we care a lot, shared the coolest moment I can ever remember onstage with anyone – and provided a template that other artists can follow. If you want to support your local venue (so do we!), wait to buy your tickets from their unique link. If they aren’t on our list – call ‘em! Otherwise, you can buy from us and we’ll make a donation to NIVA.”

Venues and production companies that have already signed on for the Everywhere All At Once stream are: