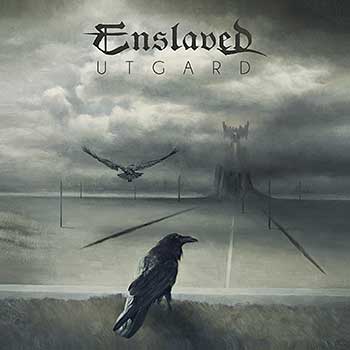 PROGRESSIVE BLACK METAL: Norwegian metal band, Enslaved, has a storied history. Germinating in the early 90s at the genesis of the second wave of black metal, Enslaved managed to be a part of—yet separate—from other bands in the scene at the time. Known for their rich history in ancient Norse mythology and Viking themes, Enslaved chose a less sensationalized path compared to its satanic black metal counterparts.

Enslaved have always done things their own way and were never afraid to expand on its ever-evolving arrangements and progressive dynamics. And much like Opeth has changed musical styles over the years, Enslaved has morphed into something entirely different from its early formation. However, one constant of the band that hasn’t changed is bassist/vocalist Grutle Kjellson and guitarist Ivar Bjørnson, who have been childhood companions since they were 17 and 13-years-old, respectively. Joined by guitarist Arve “Ice Dale” Isdal, keyboardist/clean vocalist Håkon Vinje, and drummer Iver Sandøy, Enslaved has created yet another masterpiece in its dynamic catalog with its 15th full-length album Utgard via Nuclear Blast Records.

Album opener “Fires in the Dark” immediately strikes with majestic Viking chants, followed by soothing melodic, folky acoustic guitar melodies before dissonant black metal riffing and more chanting roll in like delicate thunder. Decorated with Grutle’s trademark harsh vocal barks—mixed with the haunting, melodic clean vocals from Håkon Vinje—you know you’re in for one magical ride. From the prog-infused influences from the likes of Pink Floyd, King Crimson, and Marillion that transpire on tracks “Jettegryta,” “Flight of Thought and Memory,” and “Sequence,” to the mid paced, menacing rhythms of “Jettegryta,” to heavy blasters such as “Flight of Thought and Memory” and “Storms of Utgard,” Enslaved runs through a plethora of surprising soundscapes that ebb and flow wonderfully throughout the album’s 44-plus minute runtime.

The thrilling “Homebound” contains a nice lyrical slant on the final verse. By tying the first line of every previous verse into one last collective verse is brilliant storytelling. The lyrics, as well as the music, are vivid, emotive, and dramatic. “Utgardr” is a one-plus minute spoken word of Nordic verses that merely serves as an interlude that precedes the atypical “Urjotun,” which may throw longtime Enslaved fans for a loop at first with its pulsating electro synth patterns. However, it’s a great track and keeps the listener’s interest level high, while mesmerizing album closer “Distant Seasons” contains lush, emotive melodies, and ethereal vocals, which lends itself as a pleasant way to end the record.

Much like King Midas in Greek mythology, everything Enslaved touches turns to gold. And Utgard is no exception. ~ Kelley Simms