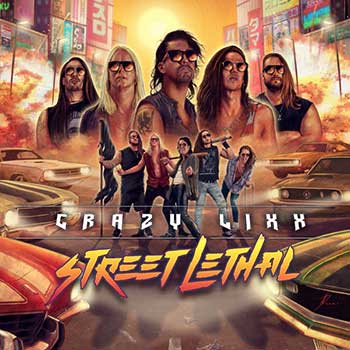 ACTION PACKED, CINEMATIC HARD ROCK: Crazy Lixx has never been out to reinvent the wheel, but the band sure has perfected its take on melodic, anthemic, and fist-pumping hard rock. The Swedish act has been remarkably consistent throughout their career, from the sassy, punk inspired snarl of Loud Minority to the glam metal of New Religion.

Granted, the band’s fans will justifiably point to 2017’s Ruff Justice as a turning point, thanks to some serious exposure gained with Crazy Lixx’s collaboration with the Friday the 13th video game. The song “XIII” was a straight homage to the plethora of 80s metal tracks that made their way to horror and action flicks back in the day, serving as a suitable companion piece to Dokken’s iconic “Dream Warriors.”

Although their follow-up in 2019, Forever Wild, was a slight step down, Street Lethal is firing on all cylinders with a collection of tracks that seriously smoke. The album on a whole possesses more of a cinematic quality than ever before, right from the Karate Kid inspired intro, “Enter the Dojo.” From there, “Rise Above” and “Anthem for America” are a double shot of riff killers that firmly announce Crazy Lixx’s triumphant return to form.

The latter in particular was released as a video clip and single, and laments lyrically about America’s lost soul as a rock ‘n’ roll paradise. The song nails it on the head when it talks about someone pulling the plug “’round 1993,” while at the same time celebrating the USA’s heritage of hard rock and heavy metal. If anything, it’s more of a celebration sung in good fun than any sort of realistic diss, but it also speaks to Sweden’s recent dominance as the new home for such nostalgic sounds.

Street Lethal is one of the best hair metal albums not released during that hedonistic decade, armed and dangerous with all of the necessary tools to acknowledge the past, while at same time presenting its own outstanding spin on an established template. “Final Fury” is a particularly welcome surprise, a short but sweet instrumental that sounds straight out of an 80s training montage, with some tasteful lead playing and a vibe that begs for a slow motion shot of hair blowing in the wind.

Crazy Lixx never forget what got them to dance, however, and ensure that the instrumental levels are always on high alert. The riffs fly fast and furious, while frontman Danny Rexon drives everything home with charisma, delivery, and chops in equal measure. This is partially what makes Crazy Lixx so exciting, especially when compared to the kitsch of a band like Steel Panther. There’s just something more intrinsically satisfying about how the band balances having a good time and treating this genre with the respect it deserves. ~ George Pacheco