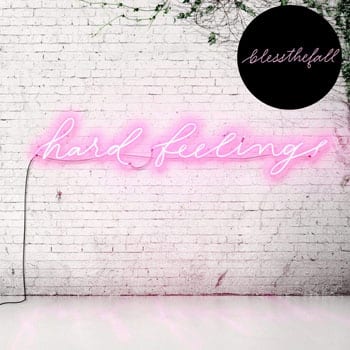 TRIED AND TRUE METALCORE:Generally, when a band is offered the chance to do whatever they like with their sound (rather than feel pressure or influence from their label), it leads to something fresh and/or different from their previous releases. However, in the case of blessthefall, joining Rise Records and being given said freedom has just brought us more of what we’ve come to expect from them. Though this isn’t a bad thing when talking about blessthefall particularly—there’s a reason the band has been around nearly a decade, recorded six albums, and persevered with little member changes since 2008—it is still a bit of a disappointment when spinning Hard Feelingsand discovering that everything feels relatively the same. That being said, blessthefall has made a name for themselves, and this album hits strong with the sound they have developed over the years. “Find Yourself” is inspirational and uplifting, “Cutthroat” breaks out heavy and delivers throughout, “Sleepless in Phoenix” is appropriately melodic and swimming, “Keep Me Close” culminates the maturity the band has shown over the years, and “Welcome Home” closes the album with a pop-like high that is infectious and endearing (the addition of clean vocalist Beau Boken’s daughter at the end is perfect).Hard Feelings isn’t groundbreaking or memorable over previous recordings, but it is definitely strong from start to finish—the lyrical writing has taken a step up, and the instruments have all tightened in their fluidity—as well as thoroughly enjoyable. ~ Nathaniel Lay