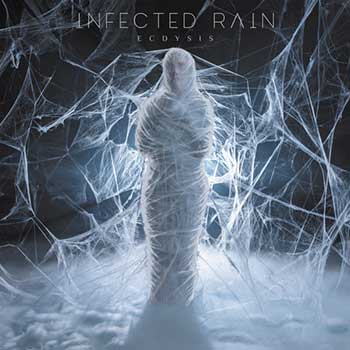 MOLDOVAN HEAVY METAL: The new year begins with musical promise as Infected Rain delivers Ecdysis, a knockout punch album that will be sure to garner love from fans old and new. It is no shock that this group has once again pushed boundaries of genre and imagination in order to deliver an album that is motivating and reflective, while maintaining a heavy vengeance. The innovative and refreshing instrumentals on Ecdysis are only made more ingenious with the use of Lena Scissorhands’ many vocal facets, ranging from superhuman screams to ethereal cleans. Aptly named, Ecdysis feels like a perfect representation of shedding one’s skin to begin anew, with every track pulling the listener deeper into the relatable messages.

Right off the start, this album paints a picture with the first track and prereleased single, “Postmortem pt. 1.” This track is full of ebbs and flows of intensity and soft, ghostly loveliness accompanied by powerful gusts of vocal harmonies. This catchy yet unpredictable song sets the tone for the rest of the album without giving away any secrets. It seems as though each song’s intro is more enticing than the last, creating an atmosphere that is almost palpable. This entire album has a way of transporting the listener into the world created by Infected Rain, making for a work that expertly flows from start to end with zero skips.

Fans have generally come to expect certain levels of amplitude and freshness from Infected Rain, and they have surely delivered this time around with a record that experiments with sounds comparable to synthwave and early grunge, nestled into the esoteric ferocity of Infected Rain’s signature heaviness. This means headbanging and dancing, what more could you want, really?

It’s amazing to hear the band push even further beyond themselves with Ecdysis, instrumentally, vocally, and lyrically. This album is wonderfully cohesive and it finishes off just as strongly as it begins, ending on a retrospective note that begs for the album to be started over and enjoyed again. ~ Jess Fleming