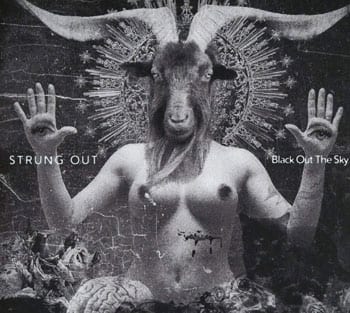 STRUNG OUT
Black Out the Sky

PUNKS GO ACOUSTIC: Interesting idea here, California punk vets Strung Out deciding to write an acoustic EP that is not re-done versions of old songs (seriously, a tired concept at this point), but, rather, is new material (with the exception of an acoustic look back at classic “Matchbook”). Cool idea, but it doesn’t start incredibly strong, with “The Architect” sounding a bit too radio rock gone unplugged, but the title track and “Town of Corazon” are exactly what one might hope an acoustic Strung Out record would sound like—melodies that are filled with both longing and hope, great vocal lines, and cool guitar work. So, it’s like every Strung Out record ever but acoustic, and it absolutely works. By this EP/mini album/whatever’s midpoint, the songs “Unkoil” and, especially, “Requiem” find Strung Out at its most despondent (which is good, as this band creates some of its best work when they mine those emotions). “Requiem” is also the release’s heaviest sonic moment, with full, crashing drums and loud guitars—it’s a great song with an interesting structure. Closer “Presidio” is Black Out the Sky’s most uplifting song, Strung Out finally pulling out more hope than longing for the final stretch. If any punk band can pull a release of new acoustic material off, it’s Strung Out, this album proving these guys can take on all challenges and emerge victorious. ~ Greg Pratt