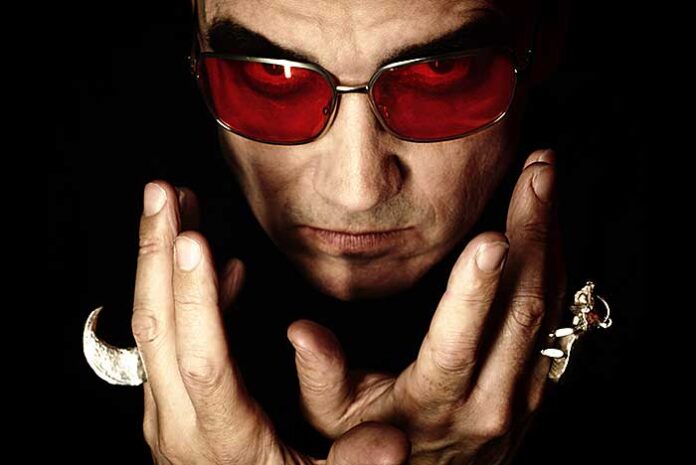 WATCH THE EXCLUSIVE PREMIERE OF PIG’S NEW MUSIC VIDEO FOR “DRUGGED DANGEROUS & DAMNED” ONLY ON OUTBURN.COM

PIG’s Raymond Watts does it again! Hot on the heels of Pain Killer, the remix companion to the acclaimed Pain Is God album, comes the Drugged Dangerous & Damned EP. To mark the release, acclaimed director Gabriel Edvy (Cubanate/Sham 69) has stirred her visions, illusions, and incantations into a surreal and dreamlike video for “Drugged Dangerous & Damned” remixed by Jagz Kooner (The Prodigy/Primal Scream).

Raymond Watts says, “When I was writing Drugged Dangerous & Damned in lockdown, I was thinking how art causes connection. The creator and consumer are then communicating. That in itself is a kind of magic. Connection is the opposite of isolation… so the invisible thread is woven.

“You might get that you when you watch and listen to this. Because when I asked Jagz Kooner to remix this song, it seems that a musical deity reached down and put magic where there was mess. As it did with Gabriel Edvy, who once again brought her vision to the video.

“As my main collaborator on PIG videos, I sometimes wonder what Gabriel will bring to each project, and yet every time she raises her sights, she hits the bullseye and knocks me over with her unique view and visual modality. I hope you enjoy watching this as much as we enjoyed making it.”

Spearheaded by the pulsating powerhouse that is the Jagz Kooner (Primal Scream/Kasabian) remix of the title track, Drugged Dangerous & Damned expands the Pain Killer thriller with a collection of exceptional and exclusive remixes from some of the alternative scene’s baddest and best.

FILTER joins the fray on “Mobocracy,” NIGHT CLUB and PIG each take turns to funk up “Rock n Roll Refugee.” YOUTH CODE delivers a punishing take on “Pain Is God,” while DIE KRUPPS and JOHN FRYER (THIS MORTAL COIL/BLACK NEEDLE NOISE) stamp their trademark sound on “Seed of Evil” and “Pain Is God” respectively.

Available on digital and 12-inch splatter vinyl (in subtle yellow and orange variants), the vinyl comes with three bonus tarot cards. Raymond Watts has personally overseen the vinyl edition of Drugged Dangerous & Damned, of which he was overheard to have described it as “…a delight at every turn.”