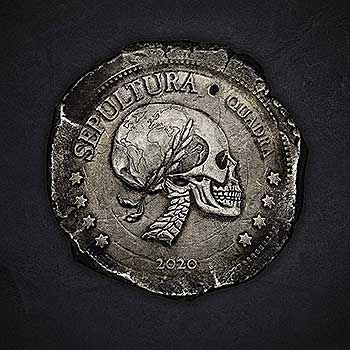 GREYBEARD HEROES OF THRASH: Sepultura’s history isn’t something that needs documentation or repeating in this review. Someone’s going to write a book about the Brazilian bashers at some point, if it already hasn’t happened. Actually, I’d be surprised if a flurry of unauthorized biographies aren’t weighing down the shelves of Brazil’s bookstores at this very moment even though it appears that the band—from Belo Horizonte became the nation’s biggest cultural export next to samba, fútbol, sugar cane, and a particular style of pubic hair waxing—is still adding chapters to its legacy.

Sepultura will never be able to shake its classic past. No matter how good a record they write, there will always be a massive contingent of monumentally ignorant, armchair quarterbacks content to do little but reference the band’s pre-1996 output as an unimpeachable high water mark. Granted, there was a time yours truly was once working on a pretty good ass groove in his own armchair while deeply engaged in this pursuit, but lest we forget this was when releases included go nowhere flub-fests like Nation and Roorback. But Sepultura has managed to find the fire with its last handful of releases, and Quadra falls into the top tier of the band’s post-Roots output. Well, most of it does.

After a quick orchestral sci-fi intro, “Isolation” starts their 15th album off with a furious volley of hotfoot riffing inspired by classic Bay Area thrash, like Vio-lence and Forbidden, only taken up a notch. “Means to an End” follows with its summoning of Chaos A.D.’s “Refuse/Resist” and uses a shuffling guitar groove, dystopian melodic layers, and hyperactive tribal drumming in recapturing the vim and vigor of their own vintage era. “Last Time” is back to basics, pounding metal with an uptempo, hard ‘n’ heavy 4/4 riff backed by rapid fire battery and a simple and effective chorus that rages along powerfully until the outlying midsection, with its trembling tremor effects and downcast squealing.

Herein lies the issue Sepultura has been stumbling over for years. Their insistence on embracing disparate genres and experiments that deviate from the blueprint. Sometimes, things work smashingly. But when they don’t—and Sepultura misses the mark more often than they should—there’s a glaring spotlight of negativity shining on things. This doesn’t even speak to the ongoing obligation to repeatedly pay homage to music indigenous to their home country. Again, this isn’t a bad thing, except when it’s done piecemeal or sounds forced like it does in various spots on Quadra. “Raging Void” derails itself with an almost screamo bridge section and Andreas Kisser’s unnecessary fiddling around with whatever new toys he’s added to his pedal board. Ironically enough, the best part of “Guardians of Earth” is the attempt at bloated 70s stadium rock as the choral voices just seem like the heaping on of unwanted gravy.

On the other hand, “Capital Enslavement” is one case in which the mishmash of influences—samba rhythms/percussion, psychedelic keyboard washes, symphonic swells all integrated into a riff Prong’s Tommy Victor has been trying to write since Beg to Differ—work well. Heads will bang and hips will swing to this one. Additionally, “The Pentagram” is an adventurous instrumental and a place where all the stomp box effects and extraneous noises serve a better purpose. As with a number of previous releases, Sepultura has a problem with sustaining the positives and highlights as the album ventures on. The title track is a pointless throwaway, penultimate track “Agony of Defeat” overindulges on the symphonic aspects, and “Fear, Pain, Chaos, Suffering” belies its title with a borderline active rock styled ballad and arguably one of the most anticlimactic finishes to an album. Ever. ~ Kevin Stewart-Panko