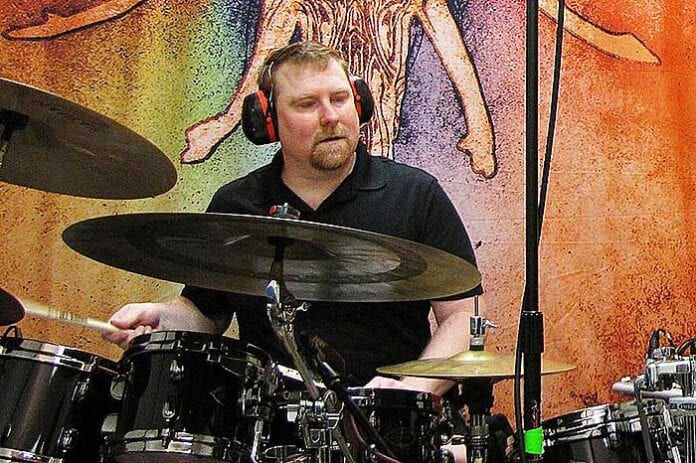 Reinert’s drumming finesse was first introduced on Death’s Human album [1991]. His drumming style was raw, such as the percussive brutality you hear on tracks “Flattening of Emotions.” But each song endures twists and turns with his unique fills and accents.

After his time in Death, Reinert continued his work in Cynic, the jazz fusion death metal band he formed with guitarist Paul Masvidal, who also played on the Human album. Cynic released the revolutionary album Focus in 1993. Even at his young age, Reinert was breaking barriers in extreme metal. Instead of constantly hitting hard on the kit, you can hear delicate jazz accents over exploding guitars and fretless bass.

Reinert was found dead in his home by his partner, and the news shocked the metal community. Those who played with Reinert expressed their condolences, close friends and family expressed their grievances, and fans mourned over his loss.

Sean Reinert influenced the metal community with his amazing talent and individualistic drumming style. But who was Sean Reinert?

THE MAN BEHIND THE KIT

Sean Reinert was born on May 27, 1971. He was intrigued by music his whole life, playing different instruments such as piano and even French horn before setting his eyes on the drums.

Reinert proved at an early age he was a percussion virtuoso. At 15- years-old, he was accepted into the New World School of the Arts (NWSA). Reinert graduated at the top of his class. Around this time, Reinert and Masvidal founded Cynic. Reinert mixed his fusion style playing with his love of extreme metal, which was very prominent where he resided in Florida.

At only 19, Death founder Chuck Schuldiner offered for Reinert to play on the Human album. After recording the album and embarking on extensive tours with Death, Reinert and Masvidal pursued their original band, Cynic.

The debut album Focus leaves behind the trashy aspects of extreme metal, honing a more progressive sound. Focus is said to be a landmark album for modern progressive and technical death metal.

Reinert wasn’t only a talented drummer. He changed metal drumming forever. While his performance still embodied the intense blastbeating style of traditional death metal drumming, he also incorporated jazz grooves and accents that were never used before. Reinert proved that metal drumming is versatile. He also helped prove extreme metal as a whole is more multifaceted than anyone could have imagined.

After Focus, Cynic briefly broke up. Reinert used this opportunity to pursue his education. He earned his Associate’s Degree from Miami Dade Community College and received a degree in Composition and Music Theory from the University of Miami School of Music. From here, Reinert moved to Los Angeles to pursue a full-time drumming career. There, he studied orchestration with Steven Scott Smalley, who collaborates frequently with Danny Elfman.

Reinert also accepted a full-time job at Capitol Records in their Mastering/Studios department. He also had another band with Masvidal, rock band Aeon Spoke.

In 2007, Cynic embarked on a reunion tour. This led to the release of their sophomore album, Traced in Air, which achieved praise from fans.

Cynic toured extensively as well as releasing two EPs (Retraced [2010] and Carbon-Based Anatomy [2011]) and one full-length, Kindly Bent to Free Us [2014]. After Reinert left Cynic, he joined the band Perfect Beings and focused on various other projects.

Sean Reinert had an extensive career, drumming for a myriad of different bands.

One of his most notable is Gordian Knot. Gordian Knot is a supergroup formed by Cynic bassist Sean Malone. Reinert played drums on the band’s self-titled album [1999] as well as on their sophomore album Emergent [2003].

Reinert’s drumming was also the perfect match for Malone’s solo album, Cortlandt [1996]. This album abandons all metal influences, sticking to a jazz only album. You truly hear the complexity of his drumming and his contributions to this album often go unnoticed.

Reinert also played drums for the Miami based progressive metal band Aghora. He performed on their self-titled album [2000] and Formless [2006]. Reinert’s jazz dominated drumming style fits in perfectly with the band’s progressive atmosphere.

There are multiple playthroughs and performances where fans and drumming enthusiasts can admire Reinert’s chops. And here are some of his best performances.

Probably one of the earliest uses of the “drum cam” filming style, you can see the unique blend of speed and sophistication he used for this legendary Death track. He played this track perfectly live, and fans can hear both the death metal and jazz elements in his drumming.

Cynic opened up for Cannibal Corpse in 1994. In this footage, you can see an up-close view of Reinert’s skillful playing. Starting with “Veil of Maya” and ending with “How Could I,” you can watch the Focus­ era material performed in all of its glory.

The Cynic track “Evolutionary Sleeper” is a song that truly shows the versatility of Reinert’s drumming abilities. He incorporates jazz inspired fills and accents with heavy hitting metal influences. This drum playthrough shows every detail of his influential playing.

“How Could I” Wacken Performance 2008

I can only imagine how it felt witnessing the groundbreaking song “How Could I” performed live at one of the biggest metal festivals.

While the drum camera has a pretty awkward angle, Reinert looks super stoked playing one of Cynic’s most influential songs. And you can’t forget the part where Masvidal is sitting down while playing arguably the best guitar solos ever written in metal.

While this isn’t exactly a performance, the isolated drumming on the Cynic track “Uroboric Forms” lets fans hear firsthand the aggressive and ethereal atmosphere of his drumming for the Focus album. The band was listening to the tracks played back at Morrisound Studios in Tampa, Florida.