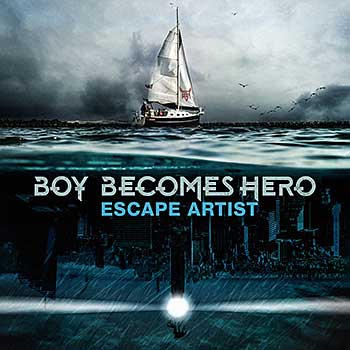 EXPLOSIVE POST-HARDCORE: Boy Becomes Hero, a project from multi-instrumentalist and vocalist Andrew Brittingham, was created to raise awareness for depression, self-harm, addiction, and suicide through music.

The story of Escape Artist, the band’s sophomore album,follows Amatera (Brittingham) as he struggles with toxic relationships, mistakes he will make and has made, and searches for Restitution, by creating a life of atonement. Ninjen (Garret Rapp) and Ajna (Jonny Craig) help our anti-hero, while captive upon a siren’s ship, find positivity and a healthy mental state in order to let go of the past and focus on the present and the future.

After setting the tone on the destructive “Flexibility,” “Craftmanship” features The Color Morale’s Rapp (the first of four tracks he appears on), an early standout on Escape Artist that flows effortlessly from atmospheric post-hardcore aplomb to a menacing thump in the matter of a few bars, before “Collapse” completely flips the script with some entrancing shoegaze. Rapp returns on “Consciousness,” this time joined by Craig (Dance Gavin Dance, Emarosa, Slaves, Isles & Glaciers), upping each other’s game through ebbs and flows of soaring hooks and fucking shredding barks. Rapp sticks around for album highlight “Interdependence,” a juggernaut that blends heavy, angular guitar work with airy soundscapes. “Abscond” again breaks up the noise, a welcomed interlude that not enough bands employ. The heart rate of Escape Artist slows on “Restitution,” Rapp’s final appearance on the album, a vulnerable outing that features soft vocals and warm synth over copious chugs. Some of the record’s best riffs come once the track hits its stride during the latter stages, so make sure to stick around for those. Featuring vocalist Ranadi, she adds yet another sonic element to Escape Artist, essentially bringing the album to a close (actual closer “Confluence” is more instrumental work) with emotional serenades on “Clouds As Mountains,” a truly beautiful song.

Escape Artist is a fantastic listen, buoyed by its dedication to crafting a superior listening experience. The instrumental tracks break up the noise so perfectly that it begs to be replayed. ~ Brian Campbell