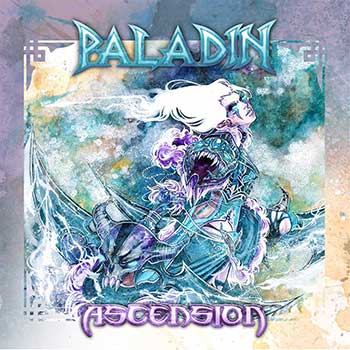 MELODIC THRASH POWER METAL: While Paladin is a comparatively new entry to the world of metal, its members have a pedigree going back a good few years and include a number of bands even casual metal fans have probably heard their gate keeping friends name drop, including Arsis, Necromancing the Stone, Cauldron Born, Sadistic Ritual, and more. The short bit of information provided by Prosthetic takes great steps to mention Paladin’s home city of Atlanta and how the band “is on a mission to bring some European flavor to Atlanta’s metal scene.” The ironic thing about this statement is how limiting it is in relation to the massive potential displayed on Ascension.

Paladin’s bent is melodic, thrashy power metal. It’s not generally a style purveyed on this side of the drink as it is by Europeans, but there have been admirable inclusions to the conversation provided by albums by Symphony X, Into Eternity, Cellador, et al. This quartet may not be reinventing the wheel with their virtuosic skill, cloud caressing vocals, and enough syrupy melody to create a new category of diabetes, but what they do is stellar. Their attack is pristine, like stainless steel scalpel carvings of accomplished musicianship sculpted into songs that balance early 80s US speed metal, European grandiosity, shrapnel shred, and forays into classical studiousness.

There are more than a few areas where DragonForce will be on the tip of the listener’s brain, but Paladin offers up more references to molten metal classics like Accept in “Black Omen,” Black Album era Metallica in “Divine Providence,” and classic thrash in “Carpe Diem.” For a debut, Ascension is remarkably mature and comprehensive. There are moments when vocalist/guitarist Taylor Washington sounds a bit overwrought and hokey when sinking down to lower registers to match those darker, heavier moments, but he’s not shy about showing off his range and power. Say goodbye to this band, Atlanta. The world is its oyster, and there are no limits they should be adhering to, not even city limits. ~ Kevin Stewart-Panko