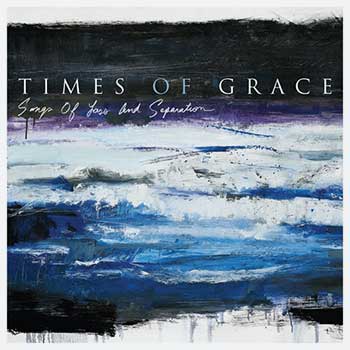 TIMES OF GRACE
Songs of Loss and Separation

MELANCHOLIC METAL: Ten years after its 2011 debut album, The Hymn of a Broken Man, Times of Grace—a collaboration between current Killswitch Engage members Adam Dutkiewicz and Jesse Leach—has finally released its follow-up album, Songs of Loss and Separation. A handful of years in the making, Songs of Loss and Separation mixes dark, melodic grunge elements with narrative storytelling, dissonant melodies, and dual vocals, with Adam taking lead vocals on more songs on this album than he did on the first one. Adam has a lower register compared to Jesse’s higher to mid-range pitch. Both voices combined create some chilling harmonies, which match up really well together.

With both Adam and Jesse enduring personal issues during the writing of this record, hints of dark, somber, melancholic, and depressive elements shine through in similar style of bands such as Alice in Chains, Pink Floyd, Days of the New, Tool or even The Cure. The lyrics deal with loss, death, and separation. “Medusa”—with shades of sludge and psychedelia—touches upon Leach’s separation from his wife. Ditto goes for the super dark “Forever,” which describes abuse, manipulation, and obsession. However, “Rescue” is almost a hopeful song that describes Jesse finding new love again in a different relationship. “Far From Heavenless” is the heaviest tune on the album—but no less melancholic or emotive—decorated with complimentary screamed/clean vocal interplay between Adam and Jesse on its memorable and chantable chorus. Joining Adam and Jesse on Songs of Loss and Separation is ex-Envy on the Coast drummer Dan Gluszak. After touring behind Times of Grace’s first album, he’s now an official member of the band and puts forth a powerhouse performance throughout the record.

Songs of Loss and Separation is like a visceral walk down a layered pathway of many different emotions delivered with passion, honesty, and with a slight tinge of hope. Although some of the tracks are rather long—plus with the rather depressing subject matter—this album might not be for every metalhead. However, the 10 thought-provoking tracks evoke so many different feelings within the listener that it will leave them feeling emotionally drained by the end of the album, but in a surprisingly cathartic and therapeutic way. ~ Kelley Simms