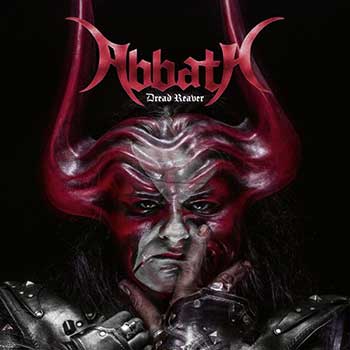 DARK AND EPIC BLACK METAL: Abbath’s third full-length is spectacular. Two years in the making and worth the weight, the Norwegian artist cements his place at the top of the genre with Dread Reaver.

Both a band and a solo venture, Abbath was formed in Bergen, Norway in 2015 after he split with extreme metallers Immortal. 2016’s self-titled debut was lauded by press and fans alike, as was follow-up Outstrider (2019), a huge album that felt hard to top. Dread Reaver manages it.

Over eight captivating tracks—including a cover of Metallica’s “Trapped Under Ice” in his own imitable style—Abbath explores the reaches of the black metal genre while tapping into other styles and areas, sophisticatedly blending elements of black metal, heavy metal, hard rock, and even some thrash while all still being uniquely Abbath. None of the songs are too long, which means they don’t outstay their welcome. There’s no fat and no filler, just pure unadulterated extreme metal.

Fading in with opener “Acid Haze” then picking up to breakneck pace with a thundering rhythm section and driving, screaming guitars underpinning Abbath’s growling vocal delivery, the dark atmosphere is set immediately. It ends on a piercing scream that fades to black before the next track kicks in at almost the exact same relentless determination.

The album is full of thick layers of sound to warm your cold, black heart. Like a blanket of sound, the production is all-encompassing and stirring. The first breather comes with the delicate Spanish style guitar intro of “Dream Cull” before the drums cascade in. This track has more space for Abbath’s vocals to come to the fore and plays around with melody effectively. “The Deep Unbound” is sophisticated organized chaos. There’s so much going on at once, but it somehow works.

At first few listens, it’s a sonic dream. When you’re ready to move on, dig a little deeper into the lyrical content, and Dread Reaver is the gift that keeps on giving. Inspired by the historical figure of Othryades—a Spartan warrior and an incredible survivor against all odds—the lyrics are suitably bombastic, intriguing, and drenched in imagery and metaphor.

“The Book of Breath” is the penultimate climax of the record. Atmospheric and heavy in equal measure, it plays around with peaks and troughs to both tease and please the listener. There’s a quiet, eerie section towards the end, but it soon picks back up again and ends on the sound of a ringing bell and soft wind before leading into finale epic title track “Dread Reaver.”

A fitting end to a huge and impressive record, black metal fans will be discussing and analyzing Dread Reaver for years to come. ~ Becton Simpson