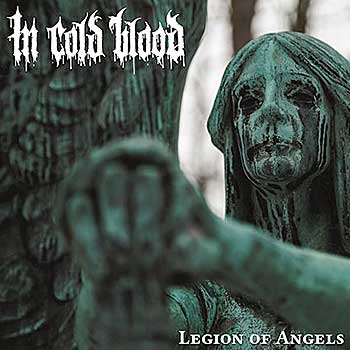 IN COLD BLOOD
Legion of Angels

MUSCLY HARDCORE: With a pedigree that includes Integrity, One Life Crew, and Ringworm, it doesn’t take a gambler with risk in his/her blood to throw all their chips down on the belief that In Cold Blood’s bag is thick necked thunderous metallic hardcore. And that bag is weighted down with mid paced chugging, palm muted down picking, and enough extraneous tri-tone usage to rattle the bones of the religious officials who originally banned its use during the Renaissance. Makes you wonder what those folks would think, were they alive today, of its prominence in contemporary music of all stripes! Chances are if that didn’t make their heads combust, blastbeats and Cookie Monster vocals would likely have hearts exploding and brains imploding on the spot.

With the band being comprised of a long lineage of Cleveland hardcore heroes, Legion of Angels sups heavily from the holy terror/Clevo sound in which Slayer gets churned through Black Sabbath’s smog sullied meat grinder and Celtic Frost’s metronome. “Slipping into Senility” is the coruscating, slo-mo heir to “South of Heaven,” “No More Lies” attaches the scorched earth metalcore to the skittish parts of “War Ensemble” and Morbid Tales, while tracks like “The Wretched Souls” and “Reaper” possess inelegant closed fist backhands à la Humanity Is the Devil and appear to be actively working on an answer to the question: “What if pushups became a band?” On the flip side, a track like “In Trance” is an interlude more rooted in psychedelic classic rock, and “Omega” weaves a Metallica-esque ballad feel into that mix, both stick to enough of the metallic hardcore blueprint to go down like a treat with regulars at the local tattoo shop, but also add enough spice to shake the doldrums off the subgenre’s tendency towards one-dimensionality. ~ Kevin Stewart-Panko