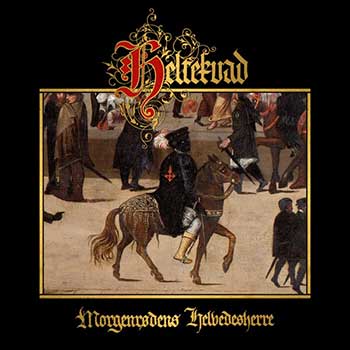 EVERYTHING BUT THE TURKEY LEG: Formed in Copenhagen, Denmark, Heltekvad first came to the public eye in late 2021 when the record label Eisenwald unveiled the three piece to the world. Composed of members from bands including Afsky, Sunken, and MØL, their first release offers up a triumphant feast of medieval black metal fit for the finest halls in any kingdom.

Morgenrødens Helvedesherre opens with an uneasy and off-kilter guitar. The dread and darkness builds until it’s momentarily broken by the sound of metal scraping on metal, a sword being unsheathed, before immediately breaking into a punky “oompa-oompa” blast section. Just like a cavalry charge at daybreak, Heltekvad is certainly here to make an impression. If the band’s mission statement isn’t abundantly clear with its ren faire tavern introduction by the start of the second song, “Ærbødig er den som sejrer,” then you should get your ears checked and listen again. They’re here to give you medieval black metal at its finest.

Throughout the record, ghostly howls, shrieks, and wretches can be heard. The depressive yet atmospheric tinges of this voice no doubt carried over from Ole Luk’s day job in his black metal band Afksy. The melodic guitar work atop of absolute frenzied blast beats sounds like a perfect continuation of the framework bands such as Dissection, Sacramentum, or Dawn pioneered in the 90s. The musical proficiency found on this record is nothing short of phenomenal. Ole Luk and Simon Skotte’s guitars and bass play off each other with precision and flair, while Simon Frenning’s drums give the music an exhilarating backbone of blasts and fills that’d make the most seasoned black metal drummer nod in approval.

While seven songs of fervently furious melodic black metal sounds good on paper, ear fatigue is definitely something the band kept in mind, so they keep this formula as fresh as possible by knowing when a song needs to be slowed and give the listener’s ear a break. A perfect example would be the third track “Ved sværdets klinge skal du forgå,” where the blast beats and guitar work slow down and allow for the drums to punctuate everything and really highlight the vocals. The spattering elements of DSBM are notable within the vocals and recall the more subdued moments of bands like Bethlehem or Silencer. This is also exemplified on “Eder og Hæder,” the fourth song, which after a minute and a half of chaos transitions from blasting riffs and drums into slower ascending and descending melodies with pulsating percussion and rhythms. It is perfectly complimented by the howls and groans weaving in and out of the instrumentation, like a medieval specter forever lost in the depths of a castle’s deepest, darkest dungeons.

The album closes wonderfully on “Døden står ved himmelens port.” Everything you’ve grown to enjoy from the previous six songs is here in full force as an absolute whirlwind of blackened might. One of the highlights from this song is Heltkevad’s use of battle sound effects to accentuate the song’s more somber sections—a wonderful, magnificent addition a handful of bands have employed. At the end of the day, truly nothing screams “medieval,” like the clang of steel, blade against blade, and the shattering of armor beneath the hands of a mighty foe, until it eventually fades into nothing but the sound of battle yet again, as it always was, and as it always will be.

Every popular act needs an underground counter, much like how in the 90s Dimmu Borgir needed acts like Summoning. If last year’s full length from the American symphonic act Stormkeep was “too mainstream” or not “trve” enough by your standard, then Heltekvad is here to remedy that problem for you. ~ Caylen Darling