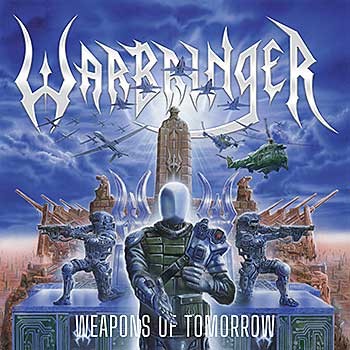 After 2013’s underwhelming IV: Empires Collapse, Warbringer literally collapsed, leaving Kevill to rebuild the band. On Weapons of Tomorrow, Warbringer continues the ferocity the band achieved on its 2017 comeback album, Woe to the Vanquished.

Opening track “Firepower Kills” begins powerfully, with its ascending Megadeth-like intro, accompanied by poignant lyrics about futuristic warfare and decorated with a catchy as hell chorus, which actually refers to the album title. It’s a banger of a beginning. Kevill’s harsh barked rasps, combined with his fantastic well timed falsetto shrieks, is a unique hybrid of Mille Petrozza of Kreator and Randy Rampage (R.I.P. 2018) from Annihilator. The headbanging anthem “The Black Hand Reaches Out” and “Crushed Beneath the Tracks” continues the band’s Megadeth/Testament/Metallica influences, with both tracks containing heavy chugging, thrashy riffs, and brilliant, trade-off guitar solos between Becker and Carroll.

If you’re already a Warbringer fan, then it’s no secret that Kevill is currently obtaining his degree to become a history professor and has always been intrigued by history, mostly in the area of geopolitics and warfare. That being said, it’s no surprise that he would tackle such a historical subject matter on the adventurous “Notre Dame (King of Fools).” The seven plus minute “Defiance of Fate” is hauntingly epic in nature, almost in the same vein as Woe to the Vanquished’s closer “When the Guns Fell Silent,” yet not as dynamic and drags on just a bit too long without much variation or shift in dynamics.

Closer “Glorious End,” with its Metallica-esque fade-in intro, brings a climactic ending to the almost 60 minute album, proving once again that Warbringer is one of the best of the newer modern thrash bands in the scene today. ~ Kelley Simms